'Bernadette': flat where it should be sharp

Cate Blanchette plays a deeply depressed woman who's losing it in Seattle. 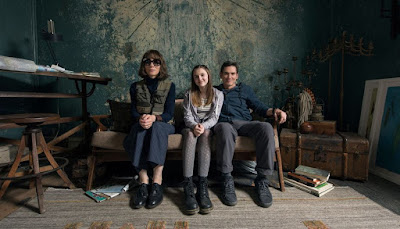 Bernadette lives in a large Seattle house that seems to be falling apart around her, although trace elements of a re-design can be seen. A sparsely furnished modern-looking bedroom, for example. Bernadette's husband works for Microsoft and has become a Ted-talking star in the world of high tech. Her whip-smart daughter is bound for Choate, a prep school that very likely will ensure her a place on the success track. Bernadette spends much of her time talking to Manjula, a Seri-like digital assistant in India.

Such is the life of Bernadette (Cate Blanchett), the title character of Where’d You Go Bernadette, director Richard Linklater’s adaptation of a well-received 2012 novel by Maria Semple.

Smart, judgmental and misanthropic, Bernadette can be a pain in the butt, and her contempt for what she calls “life’s banalities” doesn't seem to have led her toward anything resembling a cultural high ground. After years of ignoring her strange behavior, Bernadette's husband (Billy Crudup) has decided his wife needs help.

I can’t say I believed any of this because Linklater's movie can’t find a way successfully to blend satiric observation and character study while also giving his movie a bit emotional heft. As social satire, the movie takes hit-and-miss swipes at middle-class parents, over-achieving kids, annoyingly progressive schools and Seattle's tech-crazed world.

Even Kristen Wiig, as a neighbor and nemesis of Bernadette, isn't able to break through; she's playing a character who's so steeped in her "liberal" values that she's turned her life into a form of parody.

Bernadette's daughter Bee (Emma Nelson) narrates a story that gradually lets us know why Bernadette has lost her grip. She was once a star architect who won a MacArthur Grant for her genius. She designed houses that others envied, but after one of her vaunted projects met a tragic end, she vanished from the Los Angeles scene. She and her husband moved to Seattle, a city she says she hates.

Bee announces that she wants her parents to take her to Antarctica as a reward for something or other. Bernadette reluctantly agrees, even though the trip means she won't be able to avoid the horror of mingling with other passengers on a cruise ship.

Linklater's best movies are conversational gems that catch moods and moments, movies such as Slacker, Dazed and Confused and Before Sunrise. He's also made observant comedies, as those of us who enjoyed Bernie and School of Rock can attest. Boyhood may have been Linklater's best and most deeply felt movie.

Here, Linklater's working in a commercial vein while trying to retain the sharp idiosyncrasies of Semple's novel. The movie's most outrageous moment arrives in the form of a mudslide that disrupts a fund-raising party at the home of Wiig's character. It lands with a thud.

There's one very nice scene in which Bernadette encounters a former colleague (Laurence Fishburne) from Los Angeles. She regales him with a dizzying monologue about what she's been doing for the last 20 years. It's one of the few times Blanchett's amped-up theatricality proves revealing.

By the end, Bernadette starts delivering on-the-nose dialogue, offering its message in a form that comes close to bromide. Someone as creative as Bernadette must create or she'll go nuts. She'll become a menace to others. She's not cut out for ordinary suburban life.

Well, I thought, who really is? And, as I said, I didn't feel as if Linklater made me believe in Bernadette or her vast array of problems.