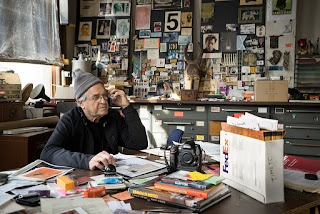 Jay Maisel, now 88, has earned his reputation as of the great photographers of his time. Unlike some of his contemporaries, Maisel refused to confine himself either to commercial projects or the art world. He made an impact on both. Maisel spent most of his career living and working in a former bank building in Manhattan's Bowery, an area that since has gone upscale. Maisel bought the building with a $25,000 downpayment he earned photographing for Life magazine. When the cost of keeping his building in a gentrifying neighborhood rose to unaffordable levels, Maisel was forced to sell. Don't feel too sorry for Maisel, though. The price he got for his building: $55 million. But moving meant paying other prices, as well. After 49 years, Maisel must have felt that he was not only moving out of his studio but out of his life. At the building others called "the bank,'' he kept ("hoarded") might be the better word, a vast array of collections, many of which he used in his work. Director Stephen Wilkes, himself a photographer and an admirer of Maisel's photographs, talks with Maisel, who proves to be unsurprisingly complex: funny, grumpy, irascible and, most important, terrifically astute when discussing imagery and color. Maisel had to discard much to move into smaller digs and part of the movie's power is the sheer wonder it generates at the amount of stuff Maisel accumulated. Wilkes includes ample examples of Maisel's work, which serve as powerful reminders of why we want to spend time watching and listening to a man who claims that he doesn't take photographs. Photographs take him, he says. 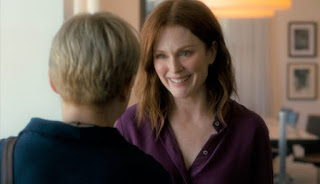 Director Bart Freundlich remakes Danish director Susanne Bier's 2007 drama with a fine cast and gender swaps in key roles. Michelle Williams, Julianne Moore and Billy Crudup headline a production that, despite what appear to be serious intentions, winds up feeling contrived and sudsy. The story begins in earnest when Isabel (Williams) returns to the US from India. She needs to secure funding for a school for orphans that she helps run. As it turns out, the head of a large media company (Moore) has heard about the school and wants to make a major contribution. To complicate matters, Isabel arrives in the middle of the week when Moore's Theresa is distracted by the wedding she's planned for her daughter (Abby Quinn). Theresa stalls on the donation, insisting that Isabel attend the wedding. If you're familiar with the original -- and even if you aren't -- you'll have little trouble anticipating a few of the plot twists Freundlich engineers. Freundlich's straight-on approach to material that sometimes borders on farce doesn't work consistently, even though Williams' low-key performance plays well against the brisk insensitivity Moore brings to her character. Secrets are revealed and the characters react to them, but a drama that's trying for maturity squanders an opportunity to deal with things movies too often neglect: the weight of difficult pasts and how people choose to carry it.
Posted by Robert Denerstein at 3:35 PM