Snakes as a pathway to the divine 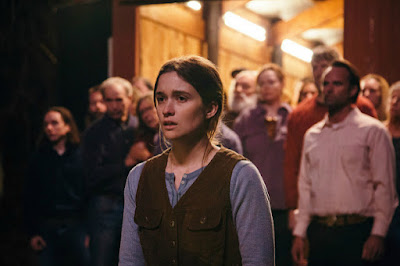 If you have an aversion to snakes, particularly poisonous snakes, you may not want to see Them That Follow, a backwoods drama about an isolated group of snake-handling Pentecostals. Directors Britt Poulton and Dan Madison Savage employ a powerhouse cast as they examine the terrible impact of those whose beliefs not only are literal -- but weirdly dangerous. Pastor Lemuel (Walton Goggins) uses rattlesnakes to purify sin: Handle a rattler without getting bitten and you're clean. If you get bitten ... well ... the devil hasn't been banished from your tarnished soul. The drama centers on Mara (Alice Englert), the pastor's daughter. Englert's Mara finds herself caught in a love triangle between the devoted Garrett (Lewis Pullman) and the non-believing Augie (Thomas Mann), a young man whose only desire is to escape this stifling community. Matters are further complicated because Mara has become pregnant after a brief but guilt-inducing fling with Augie. Olivia Colman -- fine as ever -- and Jim Gaffigan, equally good, portray Augie's believing parents. The directors fill the movie with Appalachian flavor as the story works its way toward a conclusion that may shake you, even if you see it coming. The mood is somber and the movie flirts with back-country cliches, inducing a degree of skepticism: Doesn’t anyone who might be called “normal” live in these woods? Kaitlyn Dever appears as Mara's best friend, a young woman who's understandably confused by the tension between religious dictate and human impulses. Nice work all around, with Goggins giving a stand-out performance as a pastor who can seem level-headed around the dinner table but who exerts sinister control over his followers. There's nothing particularly profound to be realized -- or at least nothing you don't' already know about the dangers of fanatical belief -- but Them That Follow catches you up with its mood and performances. And, yes, scenes involving the snakes will give you the shivers.