Dwayne Johnson and Jason Statham star in an action spinoff that wears out its welcome. 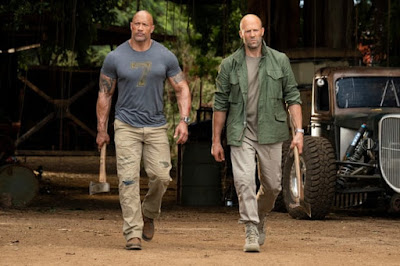 attempts to expand the reach of an amped-up series that began in 2001 with a Rob Cohen-directed movie about street racing. The original movie, modest by current standards, marked a surprising entry into that summer's big-screen sweepstakes, a refreshing blend of speed and grit.

The series, which long ago made the leap into franchise territory, now has spawned a slightly demented offspring, one that’s far enough afield from its cinematic parents that it feels obliged to proclaim its lineage. I’m cynical enough to view Hobbs & Shaw as a superfluous mutation, an attempt to squeeze more mileage out of a series that never seems to run out of road.

Fast & Furious Presents: Hobbs & Shaw teams Dwayne Johnson's genially muscular Hobbs with Jason Statham's sneering Shaw. The two characters have history, which is another way of saying they don't get along. Both, of course, have cropped up in previous Fast & Furious movies. This time, they’re the main event.

A largely irrelevant plot brings these bickering battlers together for a job that Hobbs immodestly refers to as "saving the world." In this case, saving the world involves preventing the spread of a bio-engineered virus that could wipe out most of humanity. The virus hardly matters because even the characters don't seem to take the plot all that seriously.

Idris Elba signs on as the movie's bad guy, which is how his character introduces himself. "I'm the bad guy," he says, cueing a laugh line by signaling the movie's wish to play a genre-mocking game -- some of the time, if it not entirely.

On the less jokey side of the ledger: An evil corporation has weaponized Elba's character, turning him into a human with robotic capabilities that approach super-heroism. He supposedly represents a new rung on the evolutionary ladder.

As it turns out, Shaw's character has a sister (Vanessa Kirby) who's also trying to save humanity, an occupation that's always in large demand in summer movies. In the movie's early scenes, Kirby's Hattie steals the virus by embedding the capsule that contains it in her palm.

The Fast and Furious franchise always has made room for bold women. Kirby's Hattie carries on the tradition; she's a genuine butt-kicker who needs little assistance from the affable Hobbs or the dyspeptic Shaw.

Remember the virus? We're told, it eventually will go ... well ... viral. The clock ticks away.

Director David Leitch and his team don't pay much attention to this or any other clock, allowing the movie to unfold over a distended two hours and 15 minutes.

Hobbs & Shaw works its way toward a finale on Samoa without making it seem as if anything vital is at stake, aside from the filmmakers' ability to engineer ridiculous chase sequences and other impossible feats. The action is outlandish but not all of it is thrilling.

If you're of a mind, you may want to view the movie's Samoan finale as a statement -- albeit one that's delivered with as much ham-fisted panache as the barbs traded by Hobbs & Shaw. Hobbs reunites with his estranged brother (Cliff Curtis). They use Samoan weapons to ward off high-tech baddies. Can simple humanity triumph?

The movie includes an appearance by Helen Mirren, as Shaw's imprisoned mother, superfluous aside from suggesting participation in future movies. There also are a couple of cameos from actors I won’t name lest I spoil the surprise.

Look, I have no need to believe anything that happens in this kind of entertainment, but I'd like, at a minimum, to feel a sense of sustained involvement. That's not easy when a movie’s action, though abundant, isn't necessarily about creating excitement but about impressing us with the filmmakers' ingenuity. A little of this sort of thing goes a long way, and Hobbs & Shaw offers more than a little -- way too much, in fact.