A man who knows how to wheedle

Richard Gere takes a risk with Norman, a movie about a wannabe Jewish big shot. Surprisingly, it pays off. 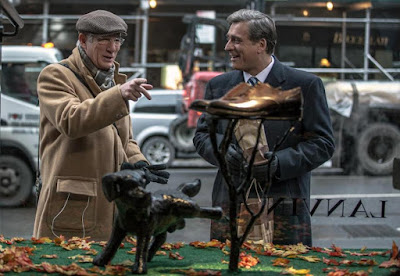 Richard Gere seems to welcome risk. I say this based on movies such as Time out of Mind (2015) in which Gere played a mentally ill resident of the streets and also because of Norman: The Moderate Rise and Tragic Fall of a New York Fixer. In his latest movie, Gere -- an actor hardly known for ethnic portrayals -- plays Norman Oppenheimer, a persistent Jewish man of enormous aspiration and very little capital. Norman does, however, have one gift: He's nothing if not persistent. He can't be shamed or deterred.

By the conclusion of the movie, Norman has overreached in terms of a plot that involves the prime minister of Israel and a possible peace settlement in the Middle East. If you can forgive Israeli writer/director Joseph Cedar for such inflation, you'll find an amusing story about a man whose entire life seems to have been devoted to exaggerating his connections to the rich and powerful. Norman knows how to wheedle.

Joining Gere in what's presented with the frolicking spirit of a caper movie are Michael Sheen (as Norman's nephew); Steve Buscemi (as a rabbi whose congregation is desperate for funds), and Charlotte Gainsbourg (as an Israeli investigator).

Divided into acts separated by title cards, Norman buzzes along pleasantly as we're exposed to Norman's first hustle. He tries to wangle an invitation to an exclusive dinner by developing a relationship with an Israeli deputy minister (Lior Ashkenazi). The minister resists, but ultimately decides that there may be something genuine about Norman.

It also doesn't hurt that Norman, in an effort to impress the fellow, buys the deputy minister a pair of shoes that costs more than $1,000 or that the deputy minister regards Norman as someone who boosted his spirit during a low point in his career. Norman knows something about low points; his life seems to have been at a perpetual low point.

Norman wears the same camel-colored overcoat throughout the movie, doesn't seem to have a home, and conducts his business by ducking into quiet spots around Manhattan to make phone calls. He's always trying to worm his way into high-rolling company, and eventually does make the score he's dreamed of -- but even that gives him only a tenuous grip on the ladder of upward mobility.

Thanks to Gere, Norman shows moments of self-awareness that sometimes push him toward pathos, and there's something believable about Norman's desire to connect people -- even if he happens not to know the person to whom he promises an introduction.

Some of Cedar's scenes are over-stylized, but he gives his movie a tonic spirit, which (I think) means we're not supposed to take it too seriously. That's a good thing because Cedar's picture of New York's Jewish community, or at least its economic upper echelon, isn't entirely flattering.

I wouldn't have thought Gere could play a wannabe macher (Yiddish for someone who gets things done), but he's on target. For him, Norman was a risk worth taking.