Sisterhood in an Italian asylum

She charts a rebellious course 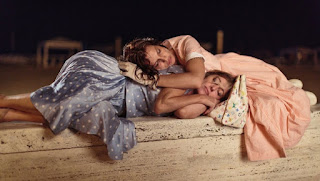 In Like Crazy, Valeria Bruni Tedeschi plays a woman who has been committed to a mental institution, but never drops the hauteur that she brings with her. For Tedeschi's Beatrice, the institution resembles a family estate over which she (not the doctors or nurses) presides. Director Paolo Virzi also introduces us to Donatella (Micaela Ramazzotti), a new patient who initially resists Beatrice's guidance, but who eventually falls under the older woman's spell. Viewers may not be able to resist comparisons to Thelma & Louise, a better picture about two women on a journey toward independence. Like Crazy eventually provides Beatrice and Donatella with an opportunity to escape the institution; they have adventures as the screenplay hints at a dark secret that torments Donatella. The two actresses keep the movie percolating, but the delusional Beatrice becomes a handful for everyone she encounters -- and that includes an audience that may find her incessant chatter a bit much. Virzi doesn't seem to solve the movie's problem; i.e., defining a line between mad and sane behavior. Instead, he opts for a tale of sisterhood marked by intermittent charm and an always refreshing dash of Cuckoo's Nest rebellion.
Posted by Robert Denerstein at 11:10 AM