Schumer and Hawn stumble in the jungle 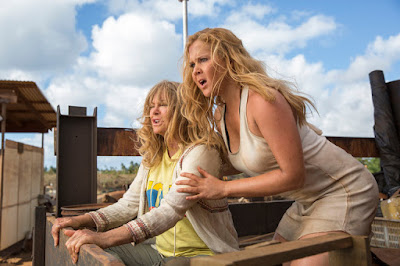 It has been 15 years since Goldie Hawn appeared in a movie. Maybe she should have waited a bit longer instead of hitching her star to Snatched, a comedy that teams her with Amy Schumer. Hawn, who has made her share of successful comedies, this time appears in a formula job that elevates raunch in the service of yuks that are few and far between -- at least for me.

Widely regarded as one of the funnier comics on the planet, Schumer received lots of praise for Trainwreck, a 2015 comedy that she wrote and which Judd Apatow directed. But Schumer didn't write Snatched. That job fell to Katie Dippold, whose credits include the recent Ghostbusters movie (not good) and The Heat (better).

Here, Dippold, with a forgettable assist from director Jonathan Levine (The Night Before and Warm Bodies), provides a platform to showcase Schumer's willingness to go raunchy in ways that become a form of feminist assertion -- and, at least in the past, have hit paydirt.

Schumer plays Emily, a young woman who loses both her job and her boyfriend in the movie's opening scenes. To make matters worse, Emily is stuck with two tickets to Ecuador, a country she planned to visit with the boyfriend who decided he could do better.

Unable to persuade any friend to accompany her to Ecuador, Emily coerces her reluctant mother (Hawn) into joining her for an adventure. Emily also has a brother (Ike Barinholtz), an emotionally hampered adult who still lives with his mother and who's unable to leave the house. Why? Because he's the comedy's demonstrably (and annoyingly) neurotic character -- as opposed to Emily, a character defined by her self-absorption.

Once in Ecuador, Emily is lured into a trap that results in mother and daughter being kidnapped. During the course of their prolonged escape, Emily manages to put a spear through someone's throat for what she insists should be seen as an "accidental murder." She also must rid herself of a colossally sized tape worm that's extracted from her mouth by a couple of locals who lure the bug from her by dangling a hunk of meat in front of Emily's face, perhaps the movie's biggest laugh.

Wanda Sykes and Joan Cusack appear in roles that could have added welcome strangeness had they been around more. Their rough-and-ready characters eventually try to rescue Emily and her Mom.

Fairness compels me to tell you that a preview audience reacted more favorably to the movie than I did, but for me, the movie's few random chuckles were matched by a significantly larger number of scowls as I watched two talented women sweat their way through the Amazon.