Was he a contender or a pretender? 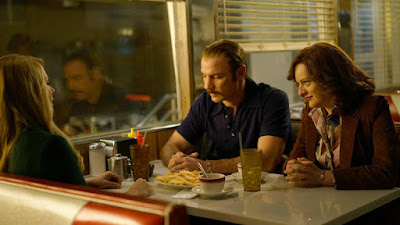 If I were considering making a movie about Chuck Wepner, the obscure New Jersey boxer who rose to sudden prominence when he fought Muhammad Ali in 1975, the last person I'd think of to play Wepner would be Liev Schreiber. Wepner was a hulk of a man whose native Bayonne left him with a raspy Jersey accent. Schreiber, on the other hand, has one of the most melodic and precise voices in show business.

But something about Wepner evidently caught Schreiber's fancy because he not only stars as Wepner in the new movie Chuck but serves as one of the movie's producers.

Schreiber knew what he was doing. His portrayal of Wepner, a boxer who was treated as the Rodney Dangerfield of boxing (no respect) is spot-on. Wepner was dubbed "the Bayonne bleeder," not exactly a moniker to strike fear in the hearts of opponents.

Schreiber ably captures the struggle that marked much of Wepner's life: He wanted to be somebody important -- not just a guy many regarded as a Bayonne-based club fighter.

For Wepner, a loss to Ali became a triumph as well as the reputed inspiration for Sylvester Stallone's Rocky. Wepner made it all the way to the fight's 15th round before Ali finished him off. Most sports people thought Wepner wouldn't survive three rounds.

Wepner became a kind of fill-in fight for Ali after the champ's fabled Rumble In the Jungle with George Foreman. But Wepner, who actually had a respectable pro record, became one of the few men ever to knock Ali down, landing The Greatest on his butt in round nine.

Wepner later meets Linda (Naomi Watts), the woman credited with helping him straighten out his life after a stint in the slammer. Wepner was busted for cocaine possession about 10 years after his championship bout.

Additional support is provided by Ron Perlman, as Wepner's manager, and Michael Rapaport as Wepner's disapproving brother. Rapaport's John hated the way the increasingly dissolute Wepner treated his daughter. Wepner always seemed to be seeking public adulation rather than accepting the love of those closest to him.

Perhaps in an effort to distinguish his movie from Hollywood's large boxing-movie card, Falardeau puts the big fight in the middle of the movie, devoting most of the Chuck's post-fight story to Wepner's precipitous, self-induced decline.

At one point, Wepner meets Sylvester Stallone. I had trouble buying Morgan Spector as Stallone; Pooch Hall makes a more credible Ali, but these are minor distractions in a movie in which every actor works overtime trying to capture his or her inner Jersey.

None of this is to say that Chuck makes it through its 98-minute running time without being bloodied. We've seen too many movies about the way lives were ruined by drugs during the 1980s. We've also seen too many movies about the way a boxer reaches a peak and then squanders any success he might have achieved. The great distinction with Wepner is that his stature derived from a loss.

The movie also belabors Wepner's obsession with movies. His favorite: 1962's Requiem for a Heavyweight, which starred Anthony Quinn as Louis "Mountain'' Rivera, a down-and-out pug who spent his time clinging to a dream about what he could have been. When Rocky becomes a smash, Wepner totally identifies himself with the movie, so much so that he thinks he deserves congratulations when Rocky wins an Oscar for best picture.

Wepner's delusions are meant to be sad, but by now, we've seen so many boxing films that chart rises, declines and redemptions that the scenario feels played out, almost to the point where there's not enough film to support its many fine performances.

Still, Schreiber's knock-out work may be enough to carry you through the movie, and Moss, familiar from TV's Mad Men, again proves that she's one of the most capable actresses around. Her Phyliss is not a woman to be messed with.

So, a reserved endorsement for Chuck. Like its main character, the movie stumbles and lumbers, but manages to survive.