The creator of the original Alien delivers an accomplished helping of sci-fi and horror -- but some of the thrill is gone. 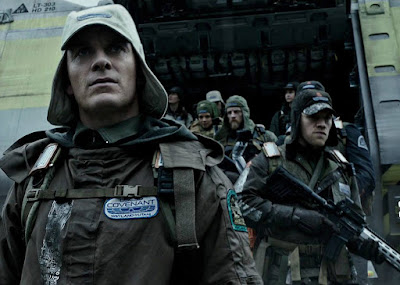 Everyone who's old enough, probably remembers their first viewing of Alien , the Ridley Scott-directed movie that in 1979 landed a direct hit to the pit of the stomach. Besides being a masterclass exercise in generating tension, Alien also helped temper the optimistic buoyancy of movies such as 1977's Close Encounters of a Third Kind. Scott brought cynicism and dread to the galaxy, offering a view of space that was industrialized, gritty and full of terrifying dangers.

James Cameron's Aliens added booming urgency and scale to the groundwork Scott had done. And, of course, there were two additional movies, neither of which found quite the same purchase in the pop-cultural landscape or should we say "spacescape?"

Scott again picks up his creature cudgels with Alien: Covenant, a sequel to his 2012 Prometheus, as well as a prequel to Alien.

In Prometheus, Scott played with big ideas and made his most memorable character an android played by Michael Fassbender, who gave his synthetic creation traces of scalding wit. Unfortunately, the serious talk in Prometheus sometimes clashed with the action Scott may have felt compelled to deliver.

Set in 2104, Alien: Covenant isn't exactly free of ideas, either. They're laid out in the movie's chilly opening -- a conversation between an android (Fassbender) and his maker (Guy Pearce). The two discuss the nature of creation and the ability of a creation to surpass its creator. The android sounds an eerie note that suggests the inherent inferiority of human life. "You will die. I will not,'' says the robot.

Little in Scott's movie matches the ominous elegance of this prolog which takes place in a large white room that looks as if it might have been inspired by Stanley Kubrick's 2001.

But ideas eventually fall prey to the expected shocks in which newly designed horrific looking creatures burst from backs or chests or latch onto the faces of their victims.

The story involves a space ship named Covenant, which is being run by an android named David. The crew has been put into deep-space sleep as the ship heads toward a distant planet with some 20,000 colonists on board. The implication: Humans must leave a fully exploited Earth.

The plan goes awry when a space storm awakens the crew, which almost immediately faces a temptation that we know will lead to trouble. A signal -- John Denver's Take Me Home, Country Roads -- emanates from a planet that's closer than the ship's original destination. Could years be shaved from the Covenant's planned seven-year journey by finding a closer and apparently habitable planet?

Katherine Waterston plays a crew member who loses her husband, the ship's captain, during the sudden reawakening. Another officer (Billy Crudup) assumes command of the small crew, which includes Danny McBride, Demian Bichir and Carmen Ejogo.

It gives you some idea about the effort that goes into characterization to know that McBride's character is called Tennessee. He wears a cowboy hat. Do you need (or want) to know anything more?

Nowhere near as memorable as the original Alien crew, this group of voyagers winds up buffeted by a conflict between Waterston's evidence-based character and a man more inclined to take things on faith (Crudup).

Additional conflict arises between two robots, both ably played by Fassbender: the android of the prologue -- named David -- and a later model named Walter. David proves the more mission-oriented to the two. Having absorbed what he needs from humankind, the sinister Walter sees no reason for keeping people around.

Scott spends significant amounts of time on the planet that the Covenant reaches, thus sacrificing the extreme claustrophobia that turned the first movie into a white-knuckle masterpiece.

Not surprisingly, the movie's peripherals are all expertly handled by the veteran Scott and his crew: from the look of the spacecraft to the idyllic surface of a planet where the crew encounters monsters capable of working their way into human bodies in a variety of ways.

Alien: Covenant arrives wrapped in a convincing package. For some, that will be enough, but for those who regard the original Alien as a breakthrough movie, it's difficult not to see Alien: Covenant as a slightly depleted helping of a once stunning pop-cultural landmark, something like a well-made TV series that continues to entertain even after it has lost much of its juice.