Daring to plan for a wedding 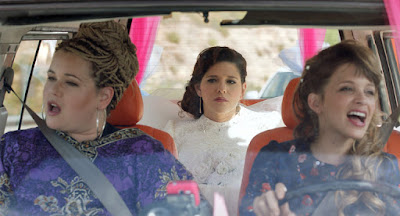 Michal, an Orthodox Jewish woman living in Jerusalem, has everything aligned for her wedding. She's arranged for the hall, selected the menu for the reception and purchased her gown. She's missing only one thing: A groom.

That's the premise of director Rama Burshtein's The Wedding Plan, a slightly cracked romantic comedy; i.e., one without a male protagonist. Yes, that sounds like high-concept nonsense, but the movie transcends such confining boundaries, probably because of Burshtein's good-humored affection for the characters who populate her story.

Most of the movie centers on 32-year-old Michal (Noa Koler). As Koler's Michal puts it: She's sick of being the guest at Shabbat dinners. She wants to be the wife who does the inviting.

For Michal, romance may be important, but marriage also represents a way for her to make the most authentic connection to the world she inhabits.

Early on, Michal is about to be married. When her fiancé (Erez Drigues) tells her that he doesn't love her, Michal's plan crumbles. The prospective groom is willing to honor his commitment, but a dejected Michal doesn't want to marry someone who approaches the pending nuptials with nothing more than resignation.

Burshtein then contrives to give Michal three weeks to find a husband, and, no, I'm not telling you what happens.

As the story unfolds, Burshtein, herself an Orthodox Jew, provides Michal with an opportunity to pursue a more secular relationship, but it becomes clear that Michal won't be able to live with a marriage that challenges the beliefs and practices with which she's been raised -- even if her pursuer, perhaps improbably, is an Israeli rock star (Oz Zehav).

Michal also goes on arranged dates as she looks for eligible candidates. She receives support from her single friend Feggie (Ronny Merhavi) and from her sister (Dafi Alpern), who seems to be in the midst of her own perpetually rocky marriage.

It takes a while to realize that Wedding Plan wants to take a lighthearted, down-to-Earth approach to faith. Michal tests her's by planning to go through with a wedding; her determination serves as a source of inspiration and bemusement to the quizzical owner of the hall (Amos Tamam) she has rented.

Koler is at once emotionally open, calculating and uncertain as the movie tests Michal's resolve, but she's willing to put her faith on the line.

It's almost as if she's saying to the Deity, "Hey, if you want me to live in a certain way, I'll do my part, but it would be nice if you helped."