Dwayne Johnson and Zac Efron are lifeguards in a movie that never convinces that it has any reason to exist. 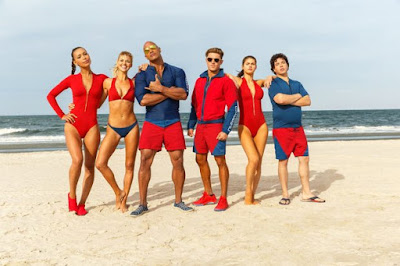 Why anyone wanted to turn a beach-boob-and-muscle TV series into a movie is beyond me. But that didn't stop director Seth Gordon (Horrible Bosses and Identity Thief) from taking on the challenge of creating a big-screen version of Baywatch.

In its new version, the always buffed Dwayne Johnson teams with an equally buffed Zac Efron to create a movie that tries to parody something that already looked like parody, a lame bit of 1990s TV that developed a following among those who liked pecs, peek-a-boo bathing suits and unblemished skin.

Mixing hard bodies with a soft-headed mystery involving drugs and real estate, Baywatch is neither funny nor tense enough to drive the movie to whatever destination it may have been trying to reach.

Despite a few attempts at self-referential hipness (cameos from David Hasselhoff and Pamela Anderson among them), the movie's humor mostly dips as low as the bikinis the Baywatch women wear.

Johnson's Mitch runs the Baywatch lifeguard squad like a military unit; he insists that the lifeguards devote themselves to protecting a stretch of Florida beach as if it were Fort Knox.

As part of a PR ploy, Mitch is forced to hire a disgraced Olympic medalist (Efron) who begins the movie as a kind of selfish outlier but (here's a surprise) eventually accepts the group ethos.

To further fulfill the demands of contemporary comedy, the movie adds the obligatory nerdy guy to its muscular mix. Jon Bass plays Ronnie, a guy who's accepted as a lifeguard trainee because he has "heart." The movie's first big joke involves Ronnie, an erection and a beach chair with slats. It's not the last penis joke, either.

Despite his bean-bag physique, Ronnie seems to catch the eye of a bombshell, run-in-slow-mo lifeguard played by Kelly Rohrbach.

Priyanka Chopra who plays Victoria, the villain of the piece, a woman with murderous plans to acquire every bit of real estate in the bay area.

A local cop (Yahya Abdul-Mateen II) wonders why a group of lifeguards are getting themselves involved in crime. You may share his consternation, but then it's probably not fair to expect a Baywatch movie to make much sense.

About three-quarters of the way through, the script finds a way to sideline Johnson and allow Efron to dominate the proceedings, a major mistake.

Forget the movie's amped-up ocean rescues: Someone was needed to rescue a screenplay that should have been beached.

If you're looking for a movie that has some laughs and effectively deals with the idiocy of bygone TV shows, try Mindhorn, a British comedy available on Netflix. It actually manages to find some laughs in telling the story of a washed-up TV hero who's asked to help solve a real-life murder