King Arthur gets the Guy Ritchie treatment -- and suffers for it. 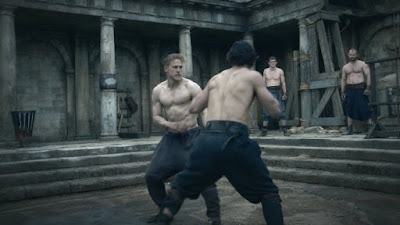 In King Arthur: Legend of the Sword, director Guy Ritchie goes medieval on us, and the result is bleary-eyed, loud and full of summer-movie bluster.

Ritchie, who broke onto the international film scene with his kinetic gangster epic, Lock, Stock and Two Smoking Barrels (1998) and who brought us a couple of big-ticket Sherlock Holmes movies starring Robert Downey Jr., goes further back in history, but, unfortunately, brings his adrenalized sensibilities along with him.

These emerging Knights of the Round Table talk with cockney-inflected accents as Ritchie tells an origins story about how King Arthur (Charlie Hunnam) came to lead his kingdom. In this version, a young Arthur escapes slaughter by an evil king wannabe named Vortigern (Jude Law). Vortigern robs Arthur of his throne by killing the boy's father (Eric Bana), an actor who amazingly manages to look composed in the midst of all the visual chaos.

Raised in a brothel as a child of the streets, Arthur's story begins in earnest when he pulls Excalibur, his father's sword, from the rock where it has been embedded for most of the young man's life. Arthur's feat is accompanied by an oops. Once Vortigern knows where the real heir to throne is, he sees only one option: Arthur must be killed.

Ritchie heaves shards of Arthur's story at us in ways that add confusion to a narrative that seems to have been invented to support a variety of booming set pieces. In one of them, Arthur visits the Dark Lands to fight bats and rats as part of his inner journey; i.e., before he can triumph, Arthur must remember the murder of his mother and father at the hands of Law's evil Vortigern.

In many respects, Ritchie's approach to the Arthurian legend owes more to Marvel Comics than it does to English mythology. One difference: It's not Arthur who has super powers, but his sword. Arthur must learn to wield this glowing weapon throughout the course of a cluttered, 126-minute running time.

The movie's editing style seems to have been inspired by the desire to inflict a thousand cuts on any given moment. Accompanied by Daniel Pemberton's pounding score, the movie barrels its way through action sequences that produce more frenzy than coherence.

When Arthur swings his sword, the movie slows down as if it's showing us the way an athlete enters what some call "the zone." Arthur perceives everything in slow motion, vanquishing foe after foe with an ease he barely remembers when the carnage stops, and the movie renews its double-time pacing.

Arthur's attempts to impress with scale are obvious from the outset: The movie's opening -- a prolog, really -- offers displays of carnage featuring mammoth creatures that resemble the kind of elephants that might appear as floats if a Thanksgiving parade were run by Satanists.

Hunnam takes a step back after his work in The Lost of City Z, which made room for subtlety. Think Crimson Peak and Pacific Rim, in which Hunnam also appeared. But in fairness to Hunnam, a set of leather pants, a buffed torso, and a street-wise attitude do not a character make.

Looking as if he's reprising the most malicious moments of the character he played in HBO's The Young Pope, Law supplies the expected hiss/boo helping of murderous villainy.

Astrid Berges-Frisbey adds a feminine touch as The Mage, some sort of magical character who helps Arthur realize his role this teeming fantasy world.

I suppose Ritchie deserves some credit for trying not to genuflect at the feet of a well-worn legend, but he drags the story of Arthur into the dirt and never allows it to shake off the mud.

Ritchie batters an estimable story, and, I'm afraid, it winds up beating him to a pulp.