Poetry and pain in a New England life 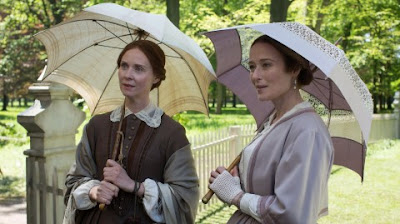 During her lifetime, only a few of Emily Dickinson's poems were published. Most of Dickinson's work received attention after her death in 1886. For most of her 55 years, Dickinson led what most would regard as an isolated life, which makes her a fine subject for director Terence Davies, a filmmaker who understands the mournful qualities of lives tormented by big questions.

The best of Davies' work (Distant Voices, Still Lives and The Long Day Closes) survive as personal masterpieces, cinematic constructions haunted by the sadness of once-vibrant lives lost to the obliterating mists of history. In A Quiet Passion, Davies brings a meticulous awareness to the story of a poet who spent her final years living in isolation in her native Massachusetts.

No one who's familiar with Davies' work will be surprised that there's an alarming quiet in Davies' new film, a sense of how life was lived before the intrusion of the contemporary noise which inundates and distracts us. That silence can be taken as a ferociously empty backdrop against which lives rattle on, some -- like Dickinson's -- with an acute awareness of their finite nature.

Early on, we meet Dickinson (Cynthia Nixon) as a student at Mount Holyoke College, where she's immersed in a severe religious environment that ill-suited her exploratory mind. When her father (Keith Carradine) comes to retrieve her with her brother (Duncan Duff) and sister (Jennifer Ehle), Dickinson couldn't be happier. She wryly confesses that such a severe dose of evangelism has made her ill.

Upon returning home, Dickinson asks her father if he would object if she wrote during the quiet of night. He agrees. She begins her engagement with her life's work.

Dickinson charted a deep course, indulging her preoccupation with the frailties of the body and with life's ultimate destination, the grave. "I felt a Funeral, in my Brain,'' is one of the Dickinson poems you might want to read as an accompaniment to Davies' movie, which -- of course -- offers bits and pieces of other Dickinson poems.

Much of the movie involves domestic scenes in Dickinson's home: arguments with her father when she refuses to attend church, entreaties by her sister Lavinia to open her heart to living, disapproval of her brother Austin's affair, and her relationship with Austin's wife (Jodhi May). Dickinson also becomes infatuated with a married pastor (Eric Loren) whose wife (Simone Milsdochter) seems to have one quality: reproach.

We also meet Emily's demonstrative friend Vryling Buffam (Catherine Bailey), a woman who has little use for the rules of society but who ultimately submits to social pressures that require her to marry.

At one point, Davies creates an interlude about the Civil War, the violent tragedy that raged during Dickinson's time. He does this by showing photos from Gettysburg and Antietam.

As much as anything, A Quiet Passion makes us feel the aching emptiness of the present, and the movie unfolds with the resonance of a deliberate footfall on a hardwood floor.

Nixon creates a Dickinson who's fiercely independent and yet enmeshed in the life of her family. Eventually, she retreats to her room and, for the most part, remains there.

I can't say that I wasn't a trifle bored at times, but Davies seeks to enlighten us about the incongruities of the period: The quest for transcendence set against the starched rigors of parlor life, for example. A Quiet Passion isn't for every taste, but like Dickinson, Davies always goes his own way, an increasingly estimable quality in today's cinema of formula and cant.