This 'Pirates' tells a cluttered tale

The approach in Pirates of the Caribbean: Dead Men Tell No Tales: Load up on effects. 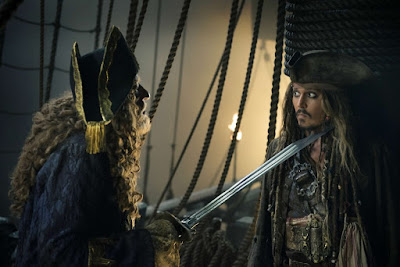 Nobody has directed better Pirates of the Caribbean movies than Gore Verbinski. Verbinski, who took charge of three Pirate voyages beginning in 2003, has a flair for visual comedy that enlivened the Pirates movies he brought to the screen.

But we're now on the fifth Pirates movie and directing chores for Pirates of the Caribbean: Dead Men Tell No Tales have been assumed by Joachim Ronning and Espen Sandberg, the duo that directed Kon-Tiki, the story of Thor Heyerdahl, the explorer who made a 4,300-mile crossing of the Pacific on a raft.

In this mega-production, Ronning and Sandberg succumb to the temptation to pump up the volume as they showcase Johnny Depp's Captain Jack Sparrow and Geoffrey Rush's Captain Hector Barbossa, two portraits that show their wear.

The directors bolster familiar performances with a new crew that includes a ghastly looking villain who has lost an ample portion of his head, Javier Bardem's Captain Salazar. We also meet two new young actors (Brenton Thwaites and Kaya Scodelario).

Before I tell you anything else, let me confess that if I never saw Jack Sparrow again my life would in no way feel depleted, and even the movie's addition of a father/son and father/daughter dynamic didn't do much to enrich a summer entertainment that overdoses on effects. These include a rickety ship with a hull that opens to swallow its victims whole, ghost sharks, ghost pirates and a parting of the sea that might make Moses do a double take.

A plot that has been stuffed like a Thanksgiving Turkey finds British naval officers chasing young Thwaites's Henry, who is searching for Jack Sparrow and trying to lift the curse that separated him from his father. The Brits also pursue Scodelario's character, an astronomer who believes she knows how to locate Poseidon's much-sought-after Trident.

Thwaites Henry and Scodelario's Carina are the movie's love interests, but their romance hardly makes the pulse beat faster. She resists; he persists. We've seen it all before.

And yes, that's Paul McCartney who appears behind a great, bushy beard in a fleeting cameo.

Bardem's Salazar circles the movie in search of revenge against Jack Sparrow, the pirate responsible for sinking Salazar's ship when he was a respectable Spanish sea captain -- or some such. Salazar winds up as captain of a ghost ship.

Ronning and Sandberg tend to flood the plot with waves of effects, gliding camera moves and lots of shtick from Depp.

Nearly every moment of this edition is served to the accompaniment of Geoff Zanelli's unavoidable score, which struck me as an attempt to add momentum and meaning to events that might not carry much weight on their own.

Having said all that, it also should be noted that Dead Men Tell No Tales probably manufactures enough verve to satisfy audiences that can't get enough of this stuff.

If you've managed to set sail without these Pirates until now, Ronning and Sandberg provide little reason to change your behavior. But fans will turn out -- if only to continue the game of ranking the Pirates movies from best to worst. And, no, I doubt whether the game is over.*
*Thanks to the reader who pointed out a stupid mistake, which I've fixed. Would have published comment, but it arrived anonymously and I try not to publish anonymous comments.

Posted by Robert Denerstein at 6:05 PM