A key figure in the struggle for rights 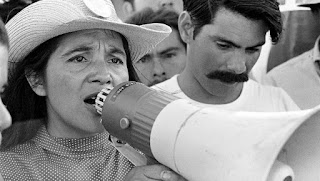 The documentary Dolores tells the story of Dolores Huerta, a Mexican-American organizer who worked with Cesar Chavez to found and advance the United Farm Workers union. Director Peter Bratt focuses on Huerta's long career of activism, which tends to be lesser known than Chavez's. In addition to charting the work of an activist, the movie also lets us know how Huerta's 11 children viewed their mother's life. For Huerta's offspring, their mother's commitments caused resentment and, later, insight and admiration. Even within the movement for the rights of farm laborers, Huerta sometimes was criticized for not staying home with her kids. Huerta paid other heavy prices for work; she was severely injured by police during a protest in 1988, an experience that brought her family together. Bratt's film helps give Huerta, instrumental in organizing the multi-year grape boycott that ended in 1970 with the signing of a new contract, the importance she deserves. More importantly, Dolores reminds us of what's possible when pressure is exerted at the grassroots level -- not to mention the persistence and sacrifice required by those who strive to bring about change. As one of her sons says, "If you're going to walk away from your family like that, you gotta believe in something bigger." Huerta, who also understands the pain her children sometimes felt, certainly believes in something bigger and she has spent almost all of her 87 years fighting for it. Dolores opens in Denver on Sept. 29 at the Mayan Theatre with appearances by Huerta for Q&As during the film's opening weekend. Check with the theater for the show times at which Huerta will be present (303-744-6799).


Posted by Robert Denerstein at 10:35 AM