He thinks everyone else is better off

Director Mike White casts Ben Stiller as a father whose confidence is lagging in Brad's Status. 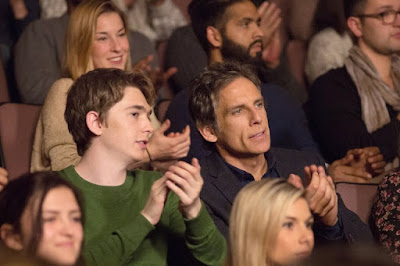 Ben Stiller knows how to squirm in his own skin. Cheers for writer/director Mike White, who has found the perfect vehicle for Stiller to express a nearly intractable case of mid-life jitters. In Brad's Status, Stiller portrays a father who accompanies his son on a tour of the New England colleges to which the young man has applied. The trip forces Stiller's Brad to evaluate his own life. Mostly, he doesn't like what he sees.

Brad believes his old college chums have surpassed him in the success department, and Brad wonders whether he hasn't wasted his life running a non-profit when he could have been focused on magnifying his bank account.

Not that Brad is suffering. And that, ultimately, may be the movie's point. Brad and his wife (Jenna Fischer) live a comfortable life in California with a son (Austin Abrams) who's going to have no difficulty attending a good college and finding a place for himself in the world.

But Brad is undone by his ceaseless competitiveness. He insists on evaluating his life in terms of others -- even to the point where he might be envious of his son should the young man be admitted to Harvard. Brad graduated from Tufts, a fine school but not Harvard.

White, who wrote the screenplays for Chuck & Buck, The Good Girl and Beatriz at Dinner and who directed Year of the Dog, this time adopts an accessible approach, keeping his focus on the way Brad's rampant feelings of inferiority look when contrasted with what seem to be his more or less problem-free life.

To make the point, White's screenplay introduces us to the men with whom Brad compares himself.
White plays a successful movie director who happens to be gay but who didn't invite Brad to his wedding. Luke Wilson portrays a hedge fund manager who has acquired all the accouterments of great wealth, including a private jet. Jermaine Clement appears as Billy, a tech whiz who made a fortune and retired to Maui to live with two young women who know how to fill out bikinis.

Michael Sheen's Craig rounds out the quartet of jealousy-inducing stories that torment Brad; Sheen's Craig is a pundit who often appears on TV. He teaches a course at Harvard and can't make it through a restaurant dinner without someone approaching him to offer praise.

During Brad's visit to Boston, he and Troy meet one of Troy's friends. Shazi Raja portrays a young woman who seems to grasp the magnitude of privilege that supports Brad's life, but she's not entirely likable, either. She's a little too glib, a little too quick with her accusations, and a little too disrespectful of Brad's experience.

That, too, gives Brad's Status a welcome sense of realism.

White brings the movie to a somewhat predictable conclusion and he pretty much follows a blueprint in scenes that show us that the objects of Brad's envy aren't problem free. Everything looks better when viewed from the outside, and Troy seems far better adjusted than a father who picks at his life as if it were a scab that's beginning to itch.

OK, so it's not an insight that will rock your world, but White delivers it in a movie that manages to be easy going and troubled at the same time -- more insightful and a bit more rueful than you'd expect from what initially sounds like such an unpromising premise.