Latest Stephen King adaptation likely to score with audiences. To me? A yawn. 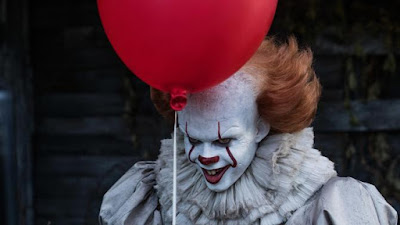 The working-class adults in It, an adaptation of a 1,000-plus page 1986 Stephen King novel, are abusive, cruel and, in some cases, detestable. Whether this arises from economic pressures or stands as some sort of class bias isn't entirely clear. Maybe it doesn't matter because the adults aren't the obvious focal point of director Andy Muschietti's adaptation; it's their kids.

To explore the fears of adolescent life, It follows -- if distantly -- a 1990 TV adaptation in which Tim Curry distinguished himself as Pennywise, the clown who terrorizes the children of Derry, Maine.

Muschietti and a trio of writers (Chase Palmer, Cary Fukunaga and Gary Dauberman) shift the time frame of King's novel from the 1950s to the 1980s and deal only with the first half of King's opus. A sequel is set to follow in which the teens of this edition return as adults.

Arriving more than 30 years after the novel's publication, this big screen version suffers from inevitable comparisons with a rash of other horror movies in which teens are terrorized by evil forces and by memories of another King-inspired movie, Stand By Me (1986).

By now, gory horror (icky streams of blood, razor-sharp teeth and other foul manifestations of malignant forces) make it seem as if we've seen It before and deprive the movie of some of the resonance that King must have intended.

Full of familiar King tropes, It tries to follow King's lead, allowing evil figures to provoke familiar fears of childhood. Who, at one time or another, hasn't trembled at the thought of entering a dank basement? That sort of thing.

In what can be viewed as thematic piling on, the teens of Derry not only must confront the buck-toothed Pennywise but are also taunted by the town bully (Nicholas Hamilton). Anyone who remembers his or her teen years may find Hamilton's character a good deal more frightening than any of the movie's booming effects, delivered with considerable verve and polish but too easily left behind in the theater, along with kernels of spilled popcorn.

The teens in the movie have named themselves the Losers Club. Bill (Jaeden Lieberher) leads the group. Bill's younger brother Georgie (Jackson Robert Scott) is taken by Pennywise in the movie's swiftly stated prologue.

The rest of the club members mostly are distinguished by single traits. One kid (Wyatt Oleff) is Jewish; another kid (Chosen Jacobs) is black; still another (Jeremy Ray Taylor) is overweight.

Every group of screen kids needs a wise-ass. In this case, the job falls to Finn Wolfhard. Jack Dylan Grazer portrays a kid dominated by his mother.

As the story develops, a girl (Sophia Lillis) joins the pack. Lillis' Beverly has a sexually abusive father and, unfairly, has been branded as "a slut" by her classmates.

Among the movie's problems: Pennywise (Bill Skarsgard), the scary clown whose makeup and goofy affect conceal his true nature, hovers near cliche, even with his ability to transform from a clown into his horrific real self.

Having pretty much found It to be a yawn, I should hasten to say that the movie likely will add some spin to the multiplex turnstiles after a lackluster couple of late-summer weeks.

Before a preview screening of It, King appeared in a short clip addressed to the audience. He said he was happy with the adaptation and praised the movie's young cast, all of whom do fine work as they spout profanities, shriek and behave as credibly as the story allows; they also discover that their hometown is targeted by waves of violence that appear in 27-year intervals.

Sometimes, it feels as if It lumbers from one set piece to another, giving each of the teens a scene that plays to his or her major fear. Each eruption of shock creates the aura of a super-charged fun house -- vivid but depthless. And at 135 minutes, the film begins to feel as lengthy as the book.

The movie teaches the members of the Losers Club a lesson that might have been culled from Hillary Clinton's campaign slogan: "Stronger together." The monster can't win if the kids unite to overcome their fears.

Although It takes full advantage of current technology in producing its many effects, the movie nonetheless feels trapped by the well-worn demands of a genre in which nearly every move feels too ingrained to break the bounds of the screen and take up residence deep inside our worst nightmares.