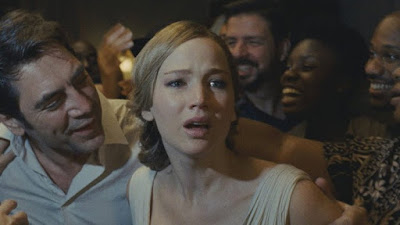 Take the exclamation point in the movie's title seriously. Watching director Darren Aronofsky's Mother! is like reading a book in which every word has been italicized for effect: the silences are oh so ominous, the creak of a shoe on a wooden floor can be jarring and when a furnace fires up, it's like a bomb has exploded. The aural atmosphere of Mother! has been amped up to take what starts as a chamber-piece helping of horror and inflate it to the point of explosion -- maybe beyond that.

In his efforts to harness as much on-screen venom as possible, Aronofsky has enlisted an A-list cast led by Jennifer Lawrence and Javier Bardem. Bardem plays a poet; Lawrence plays his devoted wife. The couple has just moved into an isolated country home.

Irritable to the point of hostility, Bardem's character ignores Lawrence's character. She plasters walls and works on turning the house into a little piece of paradise. You probably have a pretty good idea where all attempts at creating paradise wind up.

Buried in an increasingly chaotic plot, you'll find a mordant comedy about the burden of uninvited guests. The first of these is a man who identifies himself as an orthopedic surgeon (Ed Harris). The surgeon excuses his intrusion by saying he thought he had arrived at a bed and breakfast inn.

Harris' character smokes when asked not to, and claims to be a devoted fan of Bardem's work. He also says he's dying. It doesn't take long for the surgeon's wife (Michelle Pfeiffer) to show up. She's so rude, she makes Harris's character look considerate. She leaves a mess wherever she goes and pushes Lawrence's character into all manner of unwanted conversations.

To augment this bizarre scenario, the couple's two grown sons (Brian Gleeson and Domhnall Gleeson) show up and immediately engage in a Cain-and-Abel style fight over their father's will.

The credits identify Lawrence's character only as Mother; Bardem is referred to as Him. This tells us that we're watching a film that wants to mine a metaphorical motherland. As is often the case, Aronofsky aims big.

Aronofsky toys with every horror trope he can find: eerie basements, spurts of blood and a steady stream of unexplained noises.

All the while, Aronofsky frames Lawrence's face in booming close-ups; Lawrence expresses perpetual consternation over the fact that her husband insists that these uninvited guests stay; his desire amounts to a betrayal.

Generally, Lawrence's character behaves in ways that make little sense, a problem that afflicts much of the rest of the movie, but Aronofsky seems intent on making us ride a wave that swells with bizarre shocks.

With a movie such as Mother!, much hinges on whether Aronofsky can tie things together. Watching Mother! is like listening to a very long (and not entirely interesting joke) hoping that the punchline makes the time we're investing worthwhile.

Now if you want to excavate some meaning from all the stylistic bric-a-brac, try this. Bardem's character is a self-absorbed artist who pays very little attention to his wife. He allows his guests to insult and berate her, every now and again offering his apologies. The fact that Harris's character is a fan suggests that Bardem's character will put up with anything -- so long as it's accompanied by massive adulation.

Aronofsky carries this notion to wild extremes in the movie's final act, which I won't describe here because Aronofsky's images do have a surprising quality that should be discovered in a theater.

Aronofsky (Noah, Black Swan, The Wrestler and The Fountain) certainly knows how to create vivid images but when he finally wraps up his movie, I had the sense that I had just watched a perversely overproduced and willfully malicious episode of The Twilight Zone. It's as if Aronofsky has channeled impulses from filmmakers such as Roman Polanski (Rosemary's Baby) and Michael Haneke (Funny Games) and given them an even more twisted spin.

Mostly I felt sorry for Lawrence, a gifted actress playing a character who takes a psychological and physical beating as the film progresses. Aronofsky may be trying to describe a particularly loathsome form of male behavior, especially among artistic men, but to make his point Lawrence must become the movie's sacrificial lamb.

Whatever the case, it's worth noting that in enlarging the characters played by Bardem and Lawrence to float his allegorical balloons, Aronofsky mostly ignores their humanity. I took the movie's preoccupation with close-ups as significant, a way of locking its characters in the prison of a tormenting vision.

With Mother!, Aronofsky huffs, puffs and damn well tries to blow the house down. But this time out, I found myself wondering whether there was anything more to the movie than the ominous howl of all that huffing and puffing.