An ode to the once ubiquitous typewriter

For these enthusiasts, the typewriter is a hallowed instrument 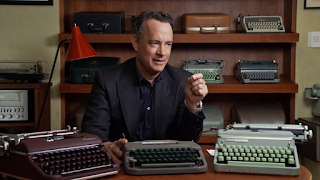 There are good reasons why the computer has replaced the typewriter as the best way to write almost anything. Word processing has proven far better than pounding the keys of a typewriter; computers are faster and make it easier to correct mistakes. Besides, as someone raised on typewriters -- even throughout a good part of my newspaper career -- I can attest to the fact that typing wore you out, although the manual carriage return created a motion that probably cut down on carpal tunnel syndrome, providing a built in motion that required taking at least one hand off the keyboard.

Don't tell any of this to the people in Doug Nichol's documentary, California Typewriter. These typewriter collectors and steadfast users of a now defunct technology believe that nothing surpasses the typewriter for composing written material.

Tom Hanks, for example, talks about his collection of typewriters and tells us how much more he appreciates a typewritten thank-you note than one delivered by email. I don't know why Hanks doesn't handwrite such notes, taking up an even older and more personal technology, the pen. But that's another story.

Much of California Typewriter centers on a Berkeley, Calif., typewriter repair shop owned by Herbert Permillion III, who opened his business in 1981 after spending years working on IBM Selectrics.

Ace repairman, Ken Alexander, who works in Permillion's shop, emerges as one of the documentary's singular voices. Alexander expresses his love for typewriters and talks about the increasing difficulties of repairing them. Replacement parts are vanishing.

We also hear the late Sam Shepard talking about his Swiss-made Hermes 3000 and the hallowed rituals made necessary by using a typewriter, inserting new sheets of paper, for example.

Not all typewriter fans are equally respected by purists. Take Jeremy Mayer, who collects typewriters and uses their parts in his sculptures. Desecration, some say, although Mayer also has a trove of spare parts that sometimes helps Alexander in his work.

How serious are typewriter collectors? As committed as the collectors of anything, including someone who paid $210,000 for the Olivetti on which Cormac McCarthy wrote most of his novels.

The history of the typewriter proves fascinating, and the movie thrives on the obsessive charms of its human subjects, qualities that prove infectious even if you're not tempted to start browsing the Internet in search of a machine of your own. The Internet, by the way, plays an instrumental role in helping to save Permillion's business from extinction, an irony that's not lost on anyone.

When it comes to obsession, I, too, am not immune. I found myself browsing various Web sites to see what it would cost to obtain a Smith Corona Clipper or, better yet, one of the Hermes 3000s about which Shepard waxed poetic. Personally, I never much like the IBM Selectric or any other electric typewriters. And, yes, I suppose I could drum up some nostalgia for the days when newsrooms were full of bulky Underwoods and you always seemed to get one that had been so abused that at least one key no longer worked or had the inconsiderate habit of sticking to the paper.