Tom Cruise plays a drug smuggler in the middle of an impossibly complicated situation. 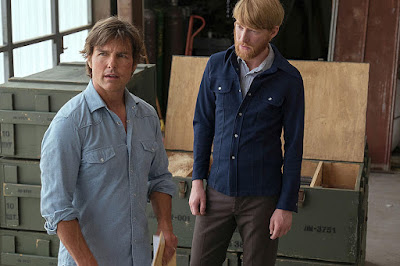 If you really want to know the story of Barry Seal, a pilot who supposedly worked for the CIA and smuggled drugs for the Medellin Cartel, you'll have to do some on-line research or read books such as Daniel Hopsicker's Barry & The Boys: The CIA, the Mob and America's Secret History. Or you could try Del Hahn's Smuggler's End: The Life and Death of Barry Seal or you could devote your time to something other than taking a deep dive into a strange footnote to US history.

As someone who hasn't delved deeply into Seal's life (I haven't read either of the above two books), I assumed that director Doug Liman took a Hollywood-sized share of liberties with Seal's story to bring American Made to the screen. He also hired Tom Cruise to play Seal, a bored TWA pilot who -- according to the film -- went did surveillance work for the CIA in Latin America, stumbled into the drug trade with the Medellin Cartel, found himself at odds with the DEA, and cut a variety of deals as he attempted to keep himself out of jail.

Liman, who directed Cruise in Edge of Tomorrow, uses a framing device to tell Seals' tale. The smuggler makes a series of videotapes that lead us into extensive flashbacks in which Seal's complicated life of crime unfolds.

Cruise portrays Seal in typical Cruise fashion. Seal is all amped-up energy as a pilot who responds to events with pinball speed and very little reflection. Cruise's Seal has enough mischievous charm to make the movie fly, that and screenwriter Gary Spinelli's appreciation for the rank absurdity that put an unknown man into the middle of a historical maelstrom.

Seal may be a pilot, but he's no Top Gun; he's a blur of serial impulses, a down-scale version of other Cruise characters, but a welcome reminder that even when he plays a less-than-admirable guy, Cruise's big-screen magnetism holds sway.

The script isn't big on motivation: Bored with his TWA gig and dabbling in the occasional smuggling of cigars, Seal becomes a prime target for CIA agent Schafer (Domhnall Gleeson). Schafer assures Seal that legality doesn't really matter so long as he's working for the "good guys."

Seal lies to his wife Lucy (Sarah Wright Olsen) and tells her that he's leaving TWA to open his own business. As the movie progresses, Lucy senses the truth, but she, too, is dazzled by the riches that Seal's drug smuggling brings, especially when the CIA relocates his operation from Seal's native Baton Rouge to the small town of Mena, Arkansas.

Liman approaches a fractured narrative with speed that tends to give a near antic quality to the proceedings which also include an appearance by Caleb Landry Jones as Seal's dirt-dumb brother-in-law.

If you approach American Made as a Cruise-driven entertainment, you'll find an involving helping of all-American cynicism in which the world spins without the benefit of a moral compass.

To bolster the film's authenticity, Liman makes occasional use of news footage, but in American Made, tone convey's more of the movie's truth than any particular incident, and -- like most movies that deal with the rise and fall of a criminal, American Made shows the dizzying fun of Seal's rise, a time when he had so much money, he couldn't launder it fast enough.

The difficulty with this kind of buzzed filmmaking is that it immerses us in a world that spins without the benefit of any moral compass, obliterating any real sense of personal responsibility. Part conniver and part pawn, Seal resembles an adrenaline junkie looking for the next high.

Whether you see this as a statement about American life during the 1980s or as a perverted form of entrepreneurial striving may not be the point: Cruise and Liman ask us to share Seal's kicks and risk, right up until the inevitable crash puts a stark exclamation point on what has been an enjoyably crazed ride.