Reese Witherspoon can't save a rom-com in which the romance isn't great -- and neither is the comedy. 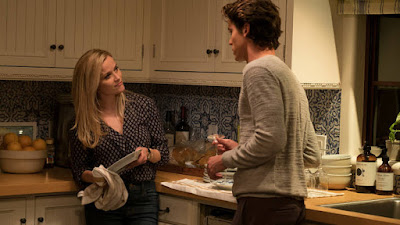 Viewed through the most positive possible lens, the new romantic comedy Home Again has one element that might be regarded as fresh. A 40-year-old woman (Reese Witherspoon) disregards age differences and has an affair with a 27-year-old man (Pico Alexander).

Fair enough, but Home Again breaks little new ground with a mostly desexualized affair that stems less from desire than from confusions caused by a dissolving marriage. Besides, the whole age thing would have been more daring had Alice been written as a 50-year-old woman.

Witherspoon's Alice Kinney has arrived in Los Angeles with her two daughters (Eden Grace Redfield and Lola Flannery) to occupy the house of her late father, a well-respected director who also was known for his womanizing.

While partying at a bar with girlfriends on the occasion of her 40th birthday, Alice meets Harry (Alexander), an aspiring filmmaker.

Harry has arrived in LA with two filmmaking buddies (Nat Wolff and Jon Rudnitsky). The trio hopes to sell a screenplay writing based on a short that gained some recognition of the festival circuit.

After a drunken attempt at romance between Alice and Harry misfires, the three young men wind up living in Alice's guest house where they engage in annoyingly positive interactions with Alice's daughters and prove to be ideal tenants. Why not? They're not paying rent.

It's nice to see Candice Bergen in a brief role as Alice's mother, the woman who suggests that Alice shelter these apparently talented young men. Too bad, the screenplay gives Bergen so little to do.

Alice and Harry eventually begin a romance. The other two guys also have their eyes on Alice, but behave like gentlemen who become ridiculously (if not amusingly) protective of her when her estranged husband (Michael Sheen) arrives with hopes of patching up the marriage.

Director Hallie Meyers-Shyer -- the daughter of filmmakers Nancy Meyers (The Intern) and Charles Shyer (Baby Boom) -- has made the kind of romantic comedy that seems to exist behind the walls of a gated community where suffering is limited and all consequences easily are attenuated.

In starting her own business, Alice meets the duplicitous Zoey (Lake Bell), who hires Alice to decorate a child's bedroom. Zoey takes advantage of Alice, treating her like a nanny. Oh, the indignity.

OK, so rom-coms often rely on easy to swallow situations and posh surroundings, environments that soothe, offering palliative care for reality-weary audiences. But it's definitely disappointing to see Witherspoon, who created a real character in HBO's Big Little Lies, step backward into a world in which the most adventurous thing anyone might do is forgo the luxury of a personal shopper.