Victoria & Abdul focuses on Queen Victoria and the Indian Muslim who perked up her final years. 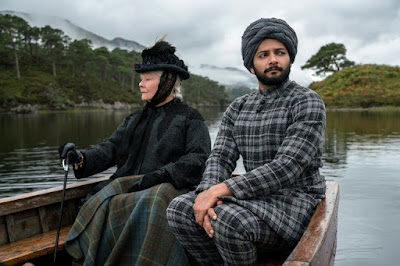 If nothing else can be said about Victoria & Abdul, a nicely appointed period piece starring Judi Dench as England's fabled Queen, it should be noted that director Stephen Frears has come up with one of fall's best special effects. No, it's not an explosion and it has nothing to do with the far reaches of space; Frears's great contribution to the world of effects arrives in the form of a sculpted, multi-colored gelatin dish that is served as dessert to the Queen, who -- in her dotage -- no longer has the most impeccable table manners.

The dessert serves as a reminder of courtly opulence, a bit of ornamentation that tells us far too much time is being spent on matters of far too little importance.

Enjoyable in the way of slightly wry British period pieces, Victoria & Abdul is so dominated by Dench that it could have been named solely for the Queen who ruled from 1837 to 1901. Victoria died at the age of 82 to be succeeded by her son Edward VII whose reign lasted a mere nine years.

When we meet the Queen, she's in that phase of life in which she's being indulged (sometimes grudgingly) by the royal household that attends to her. She falls asleep during formal dinners and needs servants to help her to sit upright in bed, as if they were pushing a great rock up a steep hill.

As imagined by Frears and screenwriter Lee Hall, the Queen's problems are twofold. She's bored and lonely, never having totally recovered from the death of her husband Albert, some 31 years prior to the start of the movie.

The emotional vacancies in Victoria's life are addressed when chance brings an Indian Muslim to London to present the Queen with a ceremonial coin. Tall and handsome, Abdul (Ali Fazal) arouses the Queen's interest. She gives him and another Indian jobs as footmen and later makes Abdul her munshi; i.e., her teacher in matters pertaining to the mysterious ways of the East. Victoria learns Urdu and listens as Abdul slips in the occasional slice of wisdom gleaned from the poet Rumi.

In the early going, Frears sets a mostly comic pace, suggesting that he may be trying to mock the pretentious formalities of court life. The burden of representing all this pretension falls on actors surrounding the Queen: Tim Pigott-Smith as her flustered secretary, Michael Gambon as the dour prime minister, and Eddie Izzard as Bertie, the Queen's ambitious but patently hollow son and heir.

Dench, who played Queen Victoria in 1997's Mrs. Brown, provides the best reason to see the movie. She makes the Queen's loneliness convincing and even conveys hints of girlish infatuation as she gets to know Abdul. She's charmed by him. She badly needs to be charmed by someone because everyone around her seems to have curdled into near-parodic members of the aristocracy.

But Victoria & Abdul has more in mind than comedy. It also assays the cultural frictions created by the presence of a Muslim in this upper-class gaggle of bigots and stuffed shirts, a crowd in which eyebrows seem to be raised in perpetual disapproval.

Victoria & Abdul is based on a true story, but I don't know whether it's accurate to say that in her final years, Victoria tried to pierce the curtain of propriety that surrounded her, taking aim at the royals who wanted Abdul sent back to Agra, India, and the obscurity from which he emerged.

Unfortunately, Abdul becomes a kind of prop, a character who allows Victoria to show her decency, as well as to make one last stab at asserting her authority. When Abdul's wife and mother-in-law arrive, their faces are hidden behind burqas. In a way, Abdul himself remains hidden. Is he a simple naif whose motives are pure? Is he a bit of a charlatan trying to advance himself? Frears would have done well to give us more than glimpse into Abdul's soul.

Speaking of Frears, it's worth noting that some of his sharper edges seem to have soften from the days of the 1980s when he gave us movies such as My Beautiful Laundrette, Prick Up Your Ears, Sammy and Rosie Get Laid and Dangerous Liaisons. There are traces of bitterness and restrained sarcasm in Victoria & Abdul, but nothing the will unsettle most viewers.

Though their main characters find themselves in quite different circumstances, Victoria & Abdul seems aligned with Frears's Florence Foster Jenkins (2016) in which Meryl Streep plays a deluded New York heiress. Both movies have crowd-pleasing elements and moments of rue and both deal with aging women who face debilitating losses of luster as the ticks of mortality's clock grow ever louder.