Jake Gyllenhaal stars as Jeff Bauman, a man who lost his legs during the Boston Marathon bombing. 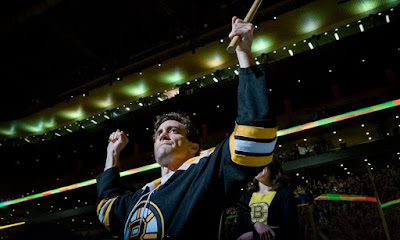 For most of its 116-minute running time, director David Gordon Green's Stronger stakes out a claim to importance. In telling the story of Jeff Bauman (Jake Gyllenhaal), the movie becomes one of the rare entertainments that isn't about graphic displays of violence but about realistic depictions of the effects of violence on those who experience it.

For those who don't recall, Bauman was waiting at the finish line for his girlfriend (Tatiana Maslany) to complete the 2013 Boston Marathon. He lost both his legs when two bombs exploded. Bauman also was able to identify one of the bombers, having stood about a foot away from the perpetrator.

In the climate of "Boston Strong" that followed the bombings, Bauman became a hero. He was honored at a Boston Bruins hockey game and later at a Red Sox game. He was bombarded with public adulation. As a survivor of a cruel tragedy, he became a symbol of triumph over terrorist mayhem.

Green shows us what Bauman's life was like in the post-bombing days. In a wheelchair and reliant on his girlfriend and his mother (a strong Miranda Richardson), this goofy but good-hearted son of Boston faced dual problems: adjusting to a disabled life and also to the attention he never sought.

Gyllenhaal's performance anchors the movie; he mixes moments of humor with moments of self-pity. Gyllenhaal portrays a man who others see as a hero, but who would rather get drunk with pals than pat himself on the back. Who can blame him? For Bauman, using the bathroom has become a physical ordeal.

To play the role, Gyllenhaal lost weight, turning Bauman into a gaunt figure with a crooked, diffident smile. A Costco employee who worked roasting chickens before the bombing, Bauman never seemed to have any great ambitions. Had the Marathon explosion never happened, he might have been content to watch Red Sox games in bars while exchanging stinging insults with friends. He might have been a working-class Peter Pan, a young man who sees no great benefit in entering the adult world.

Bauman doesn't always appreciate the help he gets from Maslany's Erin, the girlfriend who quits her job to help him through his arduous therapy, which includes learning how to use artificial legs.

Green tries for authenticity in his depiction of working-class Bostonians, a little grittier than what we saw in Peter Berg's Patriots Day, another movie about the Boston Marathon bombings.

Bauman's family and friends are tough, profane and not altogether agreeable people who are only too happy to join him at a bar or try to capitalize (emotionally) on what they view as his ascendance. As Patty, Bauman's Mom, Richardson creates a character who's jealous of Erin's potential to replace her as the central figure in Bauman's life.

Richardson's face reflects a mixture of bitterness, fear and occasional hope; she never tries to make us like a character who has difficulty letting go of her son. Bauman lived with his mother at the time of the bombing and remained at her home afterward.

Maslany proves equally determined as Erin, a young woman who goes through hell along with Bauman and is pushed to her breaking point. Like everyone in Stronger, she's not afraid to lose her temper.

Green doesn't dwell on the explosion that took Bauman's legs, although he brings it up in quickly inserted flashbacks that, by the end, of the movie, blossom into a more vivid (and perhaps unnecessary) display of the blast that changed Bauman's life.

Scenes in which Bauman meets Carlos (Carlos Sanz), the bystander who helped him at the site of the bombing, are well played by both Sanz and Gyllenhaal. Carlos lost a son in Iraq. Evidently, many who had relatives who were killed or maimed in America's recent wars looked to Bauman's story to reassure them that life could go on.

Toward the end, Green yields to a temptation that he manages to elude for most of the movie. He allows the movie to join the inspirational chorus in which Bauman, as a person, and Bauman, as a symbol, begin to merge. These final scenes have an unavoidable taint of hagiography that mingles with a genuine thematic attempt to give Bauman moments of reconciliation that allow him once again to be comfortable in his own skin.

Obviously, there will be those who find the film's conclusion more stirring than I did, but Gyllenhaal's strong performance and equally vital contributions from a fine supporting cast keep Stronger on track, making it a powerful look at what happens when ordinary people are damaged by events over which they have no control.

I can't think of a more wrenching scene than the one in which doctors remove the bandages from Bauman's remaining legs. Not only is the removal screamingly painful, but it also serves as a stamp of finality on Bauman's condition.

Green shoots the scene creatively, showing us Bauman's tormented face and the face of his girlfriend in profile; what remains of Brad's legs appears in soft focus between them. Do we want to see? Does he?

Together, Green and Gyllenhaal have made a movie that asks us not to look away.