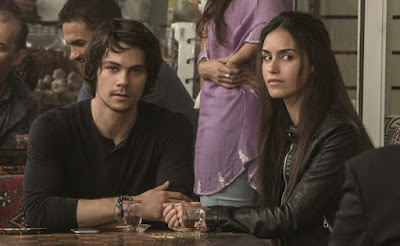 Loads of people are familiar with author Vince Flynn’s Mitch Rapp, a disaffected loner recruited into the CIA after a terrorist murders his girlfriend on a beach right after the two have become engaged. It may take every fan of Flynn’s 16-book series to turn American Assassin — the first Mitch Rapp movie — into a hit.

Muddled by a scattered screenplay and hampered by Dylan O’Brien’s notably unremarkable performance as Rapp, American Assassin does a fair share of globe hopping but manages to go nowhere.

After his fiancee’s death, Rapp trains himself to become a killing machine, staging a one-man Libyan mission to kill the leader of the terrorist group responsible for his fiancee's death. When American troops disrupt his work, Rapp finds himself in the hands of the CIA, where the head of counter-intelligence (Sanaa Lathan) turns him over to Stan Hurley (Michael Keaton), a former Navy SEAL who trains his charges to be merciless killers.

At first, it seems as if swarthy complexions constitute the movie's only requirement for villainy, but we soon learn that a disaffected American (Taylor Kitsch) is trying to arrange a plutonium deal in Poland. Kitsch's character plans to sell Russian plutonium to Iranians — or some such.

That’s only the beginning of global hopscotching that takes Rapp to Turkey, Italy and other places, moving too quickly even to offer travelogue diversions.

In my view, only three reasons justify seeing American Assassin: a reasonably imaginative virtual reality training sequence, Keaton's crazed handling of a wince-inducing scene in which Stan is tortured and a late-picture explosion that can’t be described without giving away the movie’s climax.

Most of the time, American Assassin -- which was directed by Michael Cuesta (Kill the Messenger) -- fails to distinguish itself, looking like a low-rent version of the Jason Bourne movies with a little Jack Ryan thrown in.

For all its fights and action, American Assassin fails to generate the excitement we associate with the discovery of a new hero. The movie pauses for occasional chunks of listless exposition before leaping ahead to the next scene or country.

The net effect: Watching American Assassin made me feel as I if were skimming a second-rate novel, leafing from one chapter to the next, vainly hoping to stumble on something good.