A feverish movie about van Gogh

Yes, there have been many movies about Vincent Van Gogh, but At Eternity's Gate is one made by a painter, Julian Schnabel. 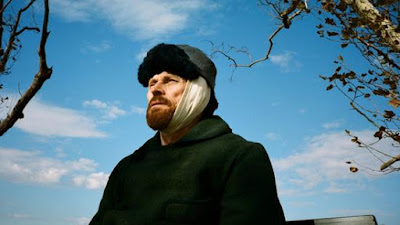 No artist seems to have inspired more filmmakers than Vincent van Gogh, not only because van Gogh survives as a painter of obvious art-historical importance but because his life helped to create the classic portrait of the suffering artist, the unrecognized genius who searches for spiritual exultation but also crashes back to earth. In van Gogh's case that meant cutting off his left ear and serving time in a mental asylum.

Julian Schnabel, a well-known contemporary artist and filmmaker, now joins the van Gogh fray with At Eternity's Gate, a movie focusing mostly on van Gogh's life in Arles, which serves as a kind of preface to his untimely and still somewhat mysterious death. He was shot in the stomach but there's disagreement about whether van Gogh was murdered or killed himself. He was 37 when he died in 1890.

Schnabel uses van Gogh's letters to his brother Theo, invented dialogue and some of the actual locations where van Gogh painted to bolster what amounts to an interpretive plunge into van Gogh's alternately soaring, alternately troubled mind, conveyed with disturbing authenticity by actor Willem Dafoe.

Schnabel, who wrote the screenplay with Louise Kugelberg and Jean-Claude Carriere, presents a view of the artist as a visionary who saw through to the essence of reality in nature but, ironically, began to lose touch with reality in his own life, often failing to remember important events.

The movie's most impressive support comes from Oscar Isaac as Paul Gaugin, a far more self-assured artist than van Gogh whose lack of prominence during his lifetime continually caused him to question his own ability.

Rupert Friend portrays Theo, van Gogh's tender, accepting brother and patron. Mads Mikkelsen plays a priest who's assigned the task of judging van Gogh's mental state before he's released from an asylum and turned back into the world.

Mathieu Amalric, who appeared in Schnabel's The Diving Bell and the Butterfly, portrays Dr. Gachet, the physician who cared for van Gogh and became the subject of one his most famous portraits. Emmanuelle Seigner plays Marie Ginoux, another subject of a van Gogh portrait and owner of a cafe in Arles, the town where van Gogh drank -- often too much. French actor Niels Arestrup has a brief but compelling turn as a fellow patient at the asylum where van Gogh commits himself.

Van Gogh heads to Arles for sunlight but arrives at a moment when the land remains under the grip of winter's chill. A desolate image of a field of lifeless sunflowers suggests that moribund nature awaits van Gogh's reviving eye.

At one point, Gaugin tells van Gogh that he paints too fast and overpaints; i.e., he uses so much paint his art tends to look like sculpture, presumably a conversation that Schnabel imagined van Gogh and Gaugin might have had.

I had a roughly similar feeling about cinematographer Benoit Delhomme's hand-held work. At best, Delhomme uses his camera to simulate the rapid strokes of a palette knife or the darting of the painter's eyes. But an unsteady camera also proves disorienting. And some of the visual tricks of focus and non-focus push too hard to give us a view of what van Gogh might have seen during episodes in which he's losing his grip.

Then, there's the question of age. Dafoe is 63 years old. Amazingly, casting him as van Gogh in his 30s doesn't prove distracting because we're witnessing an intensely subjective account of van Gogh's final years. Think of Dafoe as the embodiment of van Gogh's old soul.

For the most part, Schnabel tries to keep his work contemporaneous with van Gogh's exploratory intellect. In an early picture episode, van Gogh approaches a young woman who's herding sheep.

"Look at me," he implores, saying he wants to sketch her.

Van Gogh yearned to be seen -- not as an act of an unsatisfied ego but as the fulfillment of what he saw as a calling. Van Gogh's desire to share his vision underlies nearly everything that happens as Schnabel moves from one part of the story to the next, allowing the screen to sink into blackness between each of the movie's vignettes.

Not one for creative timidity, Schnabel even begins the movie daringly. We see a darkened screen and hear van Gogh talking about his very simple desire for acceptance and comfort. There aren't many directors who'd begin a movie about one of the world's most famous artist with words rather than with an image.

At Eternity's Gate marks the second film Schnabel has made about a painter. His first feature -- 1996's Basquiat -- looked at another painter whose life ended early. Jean-Michel Basquiat was 28 when a heroin overdose cut his life short.

If you're interested in understanding the mood Schnabel creates in his second movie about someone who can be viewed as an art-world casualty, you might want to take a look at the painting for which the movie is named. That painting was made by van Gogh in 1890, the year of his death. It shows a balding man sitting on a wooden chair in front of a sketchily drawn fire. The man's elbows rest on his thighs. His head is buried in his clenched fists. Presumably, he's thinking about his death, which may be imminent.

Can van Gogh's subject find something redeeming in this moment of sorrowful apprehension? You may want to think about that question as you watch Dafoe become van Gogh in Schnabel's boldly conceived, if somewhat jagged, interpretation.*

My favorite movie about artist Vincent van Gogh remains director Paul Cox's Vincent, a documentary that made its way into theaters in 1987. To make his movie, Cox used van Gogh's paintings, the locations in which the painter worked and excerpts from letters van Gogh wrote to his brother Theo. The combination allowed Cox to capture van Gogh's search for transcendence, a spiritual journey anchored in the earthy realities of the landscapes that compelled him.

Posted by Robert Denerstein at 5:45 PM