Lucas Hedges shines as a young man caught between his family and his sexual identity. 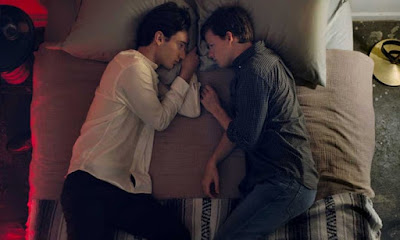 The skills of Lucas Hedges are on display in three highly anticipated fall movies: Mid-90s, Boy Erased and Ben is Back. In Boy Erased, the second of these movies to reach the nation's screens, Hedges plays Jared, a young gay man whose religious parents send him to conversion therapy. In Ben is Back, due in December, Hedges portrays a drug-addicted kid whose mother (Julia Roberts) desperately wants to get him off his self-destructive path.

Although his role in the skateboard movie Mid90s is a small one, Hedges -- nominated in 2016 for a best-supporting actor Oscar for Manchester by the Sea -- clearly is having a moment. He deserves it: He should be contributing to movies for a long time.

Boy Erased casts Hedges as the intriguingly conflicted Jared Eamons, a character who can't reconcile his desire to be a normal kid with this sexual inclinations. Sensitive and vulnerable, Hedges never loses touch with the essence of Jared's character: He's a kid who wants to please by doing the right thing.

Jared has been brought up in a fundamentalist Christian environment by his homemaking mother (Nicole Kidman) and his pastor father (Russell Crowe). Unrebellious by nature, Jared takes his faith background seriously.

Boy Erased focuses on what happens when Jared's parents learn that he might be gay and send him to Christian conversion therapy, something he initially approaches with the hope that it will work. Jared wants to be "cured" and he harbors no apparent ill will toward his parents.

Based on a memoir by Gerard Conley -- the model for Jared -- Boy Erased spends much of its time following Jared through conversion therapy where he's guided by Victor Sykes (Joel Edgerton). Part cheerleader and part disciplinarian, Sykes bases his actions on the notion that gayness is a choice that can be unchosen with hard work and rigorous applications of faith.

Sykes is assisted by Brandon (Flea), a guy who approaches his job as if he's a drill sergeant charged with yelling the gay out of the young people who find themselves in this program.

During Jared's conversion therapy, he stays in a motel with his mother, who offers support and who watches the impact the "therapy" has on Jared.

The movie, which marks Edgerton's second directorial effort after 2015's The Gift, doesn't spend a lot of time on the other young people who have been sent to Love in Action, the program in which Jared has been enrolled. Troye Sivan plays a curly headed blonde who tells Jared that he should fake his conversion, get out of Love in Action in one piece and then decide how he wants to live. Britton Sear appears as Cameron, a kid with no ability to articulate what he's going through.

For all of its sincerity in trying to deal with the devastating impact such therapy can have on young people, the movie's most interesting and vividly drawn characters are pushed to the periphery: As Jared's mother, Kidman backs her husband in his faith decisions; she's spent her life as a supporting player in her husband's drama. Gradually, she begins to understand that her heart has room in it for two loves: God and her son.

Crowe receives less screen time but wastes none of it. A Baptist pastor who also owns a Ford dealership, Crowe's Marshall Eamons can't break through the boundaries that have defined his life. When he tells his son that he can't live in his house as a gay man, he's not threatening, he's simply stating what he sees as a bedrock fact of his existence.

Crowe has a strong final scene with Hedges that wisely refuses to resolve this difficult father/son relationship.

Boy Erased isn't the first movie this year to deal with conversion therapy. This summer saw the release of The Miseducation of Cameron Post, which starred Chloe Grace Moretz as a young woman pushed into a program like the one in which Jared finds himself. That movie focused on the way Moretz's rebellious character found kindred spirits to help her survive brainwashing by people who present a friendlier front than those in Boy Erased.

Though quite different in their style and tone, both movies are credible -- if unexceptional -- dramas. The path through conversion therapy offers few surprises. Still, a high-powered cast adds distinction to Boy Erased. Kidman and Crowe do memorable work and Lucas adds another strong performance to his already impressive resume.