The Front Runner doesn't quite make it as a relevant foray into the world of journalism and politics. 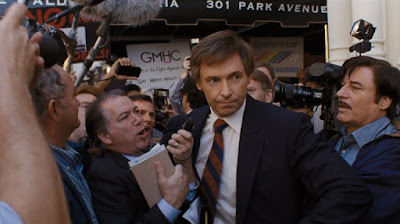 A sure bet to win the Democratic nomination for the presidency in 1988, Hart was undone by names that suddenly dominated the news, notably, a girl named Donna Rice and a yacht named Monkey Business.

Hart defended himself against charges of marital infidelity by insisting that his private life was no one’s business but his own. He was staunch in his resolve, but couldn't save himself.

Hart’s fall probably is destined to become a footnote in American political history, unless you’re convinced — as some are — that Hart’s story changed journalism and the fate of the US. That’s a heavy burden for one man to carry and it’s also a burden that the movie The Front Runner can’t carry, either.

Based on All the Truth is Out, a fine book by journalist Matt Bai, The Front Runner tries to take an encompassing approach to Hart’s story, leaning toward a view that blames the press — particularly a couple of Miami Herald reporters — for staking out Hart’s Washington, D.C. townhouse in hopes of confirming a dalliance with Rice.

As a result, the press and the national debate became focused on character (or lack of it) instead of the salient issues of the day -- or so the argument goes.

Director Jason Reitman had a hand in writing the screenplay, along with Bai and Jay Carson, a political operative who also works in the entertainment business, having done multiple duties on Netflix's House of Cards. The screenplay makes various points throughout but Front Runner remains frustratingly diffuse.

Hugh Jackman has been cast as Hart. Jackman does as well as possible in conveying Hart’s intelligence, his insistence on not answering certain kinds of questions and his refusal to listen to a staff that knew he was in more trouble than he realized.

The peripheral performances are a mixed bag. Steve Zissis and Bill Burr portray two Miami Herald reporters, narrowly focused guys who see only one side of the journalistic argument: Get the story, let the chips fall where they may.

Mamoudou Athie plays a Washington Post reporter (a composite figure) who agonizes about what his editors want him to ask Hart. Ann Devroy appears as an editor at the Washington Post who claims that the press isn't going too far: Powerful men shouldn’t abuse their power with impressionable young women.

Molly Ephraim has a nice turn as a Hart aide who understands how painful it is for Rice (Sara Paxton) to have been thrust into a maelstrom. Ephraim's character winds up selling Rice out anyway.

I’m an admirer of actor Alfred Molina, but even he can’t overcome the images of Ben Bradlee created by actors in previous movies (Jason Robards in All the President’s Men and Tom Hanks in The Post) — not to mention a couple of documentaries in which the real Bradlee can be seen.

J.K. Simmons, a Reitman regular, plays Hart's campaign manager, a role that could have used some expansion. Still, Simmons conveys the dejection that haunts a man who sees a cause in which he deeply believes going down the drain.

In dealing with Hart’s wife, Lee, who's played here by Vera Farmiga, the movie suggests that Lee and Gary Hart had reached some sort of agreement about how they’d conduct their marriage with Lee stipulating only that she didn’t want to be embarrassed by her husband. After the Rice debacle, Lee Hart found her home in Troublesome Gulch, Co., besieged by reporters. She became another victim.

Nearly everything about The Front Runner plays against unstated ironies. Bill Clinton survived Monica Lewinsky and the current resident of the White House has set a new bar for what we know about the sexual behavior of a president.

If you haven’t read Bai’s book, you should. But the real story of Gary Hart remains unknowable. Was he a hero who stood up for rights of privacy? Was he an arrogant man who believed he had a license to be reckless? Was he really brilliant enough to have altered the course of American history? Did he foresee every important problem we face today?

Reitman does a good job creating the chaotic swirl that surrounds a political campaign. He also inserts enough sardonic humor to make Front Runner entertaining but the movie can't sustain the kind of absurdist kick that Reitman brought to his best movies: Thank Your for Smoking, Juno, and Up in the Air.

If The Front Runner is meant to be taken as a cautionary tale, it arrives 30 years too late. In the current bold-faced clash between powerful politicians and journalists, the Hart story already has been consigned to small print.