Literary forgery for fun and profit

Can You Ever Forgive Me? features strong performances from Melissa McCarthy and Richard E. Grant. 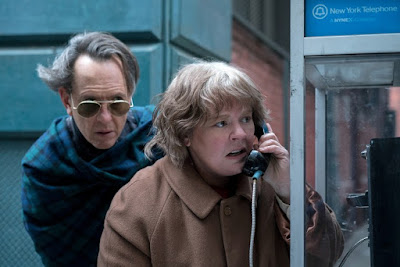 She drinks enough to qualify as an alcoholic. She once enjoyed success writing biographies but recently has fallen on hard times. She's so foul-mouthed that she can't hold a regular job. She's months behind in her rent and can't afford a visit to a veterinarian for her beloved cat. No one cares that she's interested in writing a biography of Fanny Brice, the comedienne played by Barbra Streisand in Funny Girl.

You'd be right to think that such a character makes a perfect fit for Melissa McCarthy, an actress who has worked mostly in profane, big-screen comedies that kicked off with 2011’s Bridesmaids. Sporting a bowl-shaped haircut, minimal makeup, and a wardrobe that barely exceeds thrift-store levels, McCarthy adds a serious twist to her big-screen resume in Can You Ever Forgive Me?

Playing a real-life character -- the late Lee Israel -- McCarthy makes ample use of her gift for invective but transfers it to a character mired in economic desperation and personal isolation. At a preview screening, it took a few moments for some members of the audience to realize that Can You Ever Forgive Me? intends to go for more than laughs.

Israel, who became a forger of highly collectible literary letters, lived the kind of fringe existence in Manhattan of the mid-90s that required mastery of many improvisational life skills.

Misanthropic and miserable, Lee has only one friend, a high-spirited gay man (Richard E. Grant). Grant's Jack Hock has no visible means of support but seems to survive with guile, charm and who knows what else.

Grant infuses his performance with a buoyancy that plays well against McCarthy's earth-bound qualities as a writer for whom crime becomes a means of self-expression.

Israel forged letters by Dorothy Parker, Noel Coward, and Lillian Hellman, mastering the art of stylistic mimicry and enlivening letters that often lacked enough spice to pique collector interest. The movie's title derives from one of Israel’s first forays into the world of crime, a postscript she attached to a letter written by Brice.

When exposure and FBI interest looms, Israel takes to stealing real letters from various archives and replacing them with her carefully crafted forgeries. With no one able to question the authenticity of the stolen letters, Israel's business continued.

Working from a screenplay by Nicole Holofcener and Jeff Whitty, director Marielle Heller (The Diary of a Teenage Girl) does a good job of showing how Israel's scheme was born: She chanced upon letters by Brice and began doctoring them. Eventually, she sustained her fraud with a room full of antique typewriters.

Israel also learned to navigate the rarified world of memorabilia collecting. When she fell under suspicion, she recruited Hock to peddle her fake letters. Hock proved himself a worthy accomplice -- if a less-than-reliable apartment sitter.

Movies about con jobs long have had appeal, but Heller introduces us to a highly specialized form of fraud, one that required knowledge, skill and a genuine respect for literature. Israel took pride in being able to write like a variety of great writers. As she puts it, she was able to be more Parker than Parker herself.

Several strong supporting performances round out the movie's pleasures. Jane Curtin appears as Israel's literary agent, a woman who can't (and who won't) push Israel's Brice biography and who knows that no one wants to work with such an ill-tempered woman. Dolly Wells does a nice job as Anna, a bookstore owner who also sells memorabilia and who is awestruck to meet Israel, whose biographies of actress Tallulah Bankhead and columnist Dorothy Kilgallen she has read.

Anna Deavere Smith impresses in a brief appearance as Lee's former lover, a woman who ultimately couldn't tolerate Israel's demanding, demeaning personality. The various booksellers Israel meets during the course of her felonious activities are rendered with credibility and concision.

A straightforward treatment by Heller allows story and performance to dominate the movie. I'm not sure that there's any great moral to be drawn from all this, but Can You Ever Forgive Me? entertains right up until an end that suggests that Israel’s reformation retained trace elements of defiance. Refreshing.