Creed again climbs into the ring

Creed II isn't as good as the first installment, but it's no disgrace, either. Credit the cast for keeping familiar characters alive -- if a little bruised. 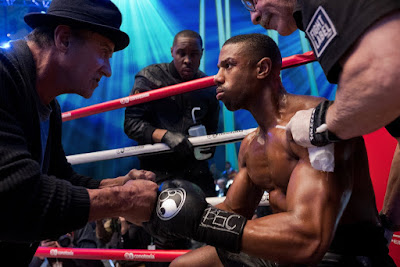 The characters in Creed II — at least some of them — talk to tombstones, take what appears to be life-threatening beatings, and somehow manage to get caught up in Russian intrigue.

Also, in Creed II, Michael B. Jordan returns as Adonis Creed, son of Apollo Creed and protege of Rocky Balboa, who now runs a Philadelphia restaurant named for his late wife Adrian. Rocky's restaurant seems sparsely attended, which may make you wonder how the former Italian Stallion keeps himself in porkpie hats.

The elder Drago has several goals in mind: defeating Adonis, recapturing the heavy-weight title for Russia (a way for him to salvage the reputation he had prior to the Soviet collapse) and using his son to banish memories of the humiliation Ivan suffered at Rocky’s hands in Rocky IV (1985).

In this episode, which has been directed by Steven Cable Jr., we also witness Adonis’ engagement to hearing-impaired Bianca (Tessa Thompson). Clearly devoted to each other, Adonis and Bianca also welcome their first child, a daughter. If they need parental advice, they always can turn to Adonis’ warm and knowing mother (Phylicia Rashad).

Sometimes a bit lethargic, sometimes amusing, sometimes brutal, Creed II loads up on father/son themes: Adonis tries to avenge his father’s death in the ring at Ivan Drago's hands; Rocky’s burdened by continuing estrangement from his own son; Ivan Drago tries to reclaim his honor through his son; and, if all that isn't enough, Rocky plays father figure to Adonis.

Initially, Rocky opposes Adonis’ desire to fight the younger Drago, perhaps sensing that Adonis' style doesn’t match well with that of the physically imposing battler from Ukraine. Rocky sits out the first fight. Rocky, of course, will return to Adonis’ corner for the rematch, dragging his charge off to the desert for a punishing training regimen before traveling to Moscow for the championship bout.

In taking over the controls, Cable stages the big fights with as much hoopla as he can muster, even if they don't quite provide the rousing uplift one expects from such movies.

The last Creed movie felt surprising and fresh. It was fun to watch Jordan and director Ryan Coogler breathe new life into an old chestnut, and Stallone's return as a beloved screen character proved welcome. Who knew we missed Rocky so much?

Creed II drags here and there, but Stallone keeps Rocky endearing and Jordan has the kind of intensity and earnestness that makes us root for Adonis, even if the whole business wavers on the edge of a split decision: Not awful enough to take the 10-count but not quite exciting enough to be declared an untarnished winner.

One wonders about the franchise's future. Coogler moved on to direct Black Panther and Jordan, who also appeared in Black Panther, is slated to star in another Coogler movie, this one about an Atlanta teacher who alters test scores to increase his school's chance for funding. (See IMDb.)

Far be it from me to tell the filmmakers to hang up the gloves, but they could well be satisfied with having achieved great success with one movie and keeping Adonis and Rocky afloat for another, even if Creed II leaves them slightly staggered by an inevitable loss of punch.

Posted by Robert Denerstein at 8:35 PM