Too embattled to wallow in grief

Viola Davis leads a strong cast in Widows, a caper movie with plenty of cynical undertow. 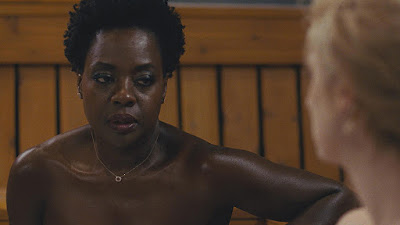 In Widows, director Steve McQueen flirts with high-concept formula but never allows it to overwhelm the movie's gritty undertow.

Written by McQueen (Hunger, Shame, and 12 Years A Slave) and Gillian Flynn (Gone Girl), Widows wraps pungent characterizations around a caper-film spine. If the plot strains at times, a fine cast and McQueen's scaldingly cynical view of life in Chicago keep the proceedings percolating.

Viola Davis stars as Veronica Rawlings, a woman whose criminal husband (Liam Neeson) dies in the film's barreling, violent prologue. Neeson's Harry and four colleagues are the in the midst of a robbery when they're killed.

Henry's Jamal Manning also wants to shift to a new kind of crime. He's running for alderman because he believes it's time that he had the opportunity to dip his crust of bread into the municipal gravy that the Irish too long have sopped up. Manning's brother (Daniel Kaluuya) serves as his happily brutal enforcer.

In a related plot thread, Colin Farrell plays Jack Mulligan, the incumbent who's running against Manning. Mulligan is the son of a corrupt former Chicago alderman (Robert Duvall) with a sour disposition and a strong commitment to holding political turf his family has dominated for years.

So how is Veronica going to pay off Harry's debt? As it turns out, Harry left Veronica plans for a major heist that could yield as much as $5 million. Because all of Harry's henchmen were killed in the movie's explosive opening, it falls to Veronica to gather the surviving widows into an impromptu gang, pull off the heist, settle Harry's debt and divide the remaining spoils.

Everyone in Veronica's crew suffers from need. Linda (Michelle Rodriguez) signs on because she's lost her store to rapacious creditors. Alice (Elizabeth Debicki) is one step away from becoming a full-time escort, saved only by the largess of a wealthy financier (Lukas Haas) who makes her his mistress. Amanda (Carrie Coon) has been left with an infant.

A women's perspective gives the movie's crime and political theater a considerable boost. Think of Widows as feminism without speeches, a genre piece featuring female characters with real agency.

It's hardly surprising that Davis proves impressively steely as a woman who misses her husband's tender embraces but proves tough enough to lead her cronies through dangerous terrain. Displaying iron-willed resolve, Veronica takes charge of her gang of widows, no easy task with this group of independent-minded women.

Widows has enough on its mind to keep from becoming one more helping of multiplex fodder. McQueen wisely lets Davis lead the way as a widow who shouldn't be messed with -- even in a world in which felons and politicians often are indistinguishable.*

*I want to reiterate that I welcome comments, particularly those that expand our knowledge about particular films or films in general. But -- and this is the point of this footnote -- I don't publish anonymous comments. Over the years, I've found that many readers have worthwhile things to say and should in no way be reluctant to take credit for their comments. So, sign your name and chime in.