She looked into the eye of war

Rosamund Pike portrays a journalist who couldn't say no to war. 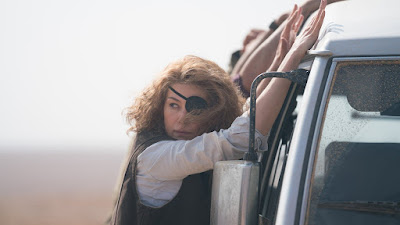 A Private War tells the real-life story of Marie Colvin's life at work. Of course, a day’s work for Colvin, an award-winning war correspondent, upsets any notion of jobs as tedious, office-bound activities. Colvin made her living reporting from some of the world's worst war zones. She lost her left eye as the result of an explosion in Sri Lanka and ultimately died in Homs, Syria.

Colvin's great achievement in Homs was to put the world on notice that Syria’s embattled president, Bashar al-Assad, was not only bombing military targets but also was obliterating the city’s civilian population. Telling that story cost Colvin her life.

Directed by Matthew Heineman, previously known for documentaries, Private War quickly lays out the rationale for Colvin’s willingness to put herself in harm’s way. She argues that the world must know about the suffering bred by war. It must hear the stories of those who suffer.

Private War will be hailed for Rosamund Pike’s portrayal of Colvin, a skilled and confident reporter who couldn't escape war-born demons in the form of PTSD and alcoholism, two conditions she was unwilling to acknowledge.

Colvin wrote for the British Sunday Times but grew up in Long Island. Pike, who’s British, masters an American accent. More importantly, she captures Colvin’s no-nonsense approach to her job and her possibly self-destructive refusal to opt for safer forms of journalism even after she was forced to wear an eye patch from her Sri Lanka wounds.

At a party in London, a friend (Nikki Amuka-Bird) suggests that Colvin seek help. She can’t break through Colvin's addictive cycle: war reporting followed by troubled respites in London.

Colvin's editor (Tom Hollander) doesn't push her to take a desk job. She's too good at what she does. He jokes about her writing for the gardening section as if the only forms of journalism were those involving extreme danger and those relegated to the sleepy nether regions of feature sections.

Heineman structures the film as a series of harrowing war tours interrupted by glimpses of Pike’s life away from the battles she covered. He includes an underdeveloped relationship with Tony Shaw (Stanley Tucci), a wealthy businessman who says he’s interested in sexual adventures rather than one-night stands.

Colvin maintains her strongest relationship with a freelance war photographer played by Jamie Dornan, bearded and close to unrecognizable after his work in the Fifty Shades of Grey movies. Photographer and reporter are bonded by the hardships they endure as a team.

Always eager to set her own path (she sneered at embedded journalists), Colvin knew how to stay a step ahead of other reporters as she worked in ravaged countries such as Iraq and Syria. In Libya, she interviewed Gaddafi just before his fall. She was a go-to journalist when it came to war.

Heineman and his team put a great deal of effort into making authentically vivid scenes of battle chaos, civilian suffering and the obscene destruction of war.

Like Colvin, Heineman must have wanted to drive home the brutality of wars, particularly its impact on hapless civilians. Scenes of mayhem are luridly convincing -- if a bit numbing after a while.

A Private War certainly has its virtues, but there’s something a little off about the movie: Heineman has a point to make but not much story to tell: Without people such as Colvin, however flawed she might have been as a person, blood would be shed without outside scrutiny.

That's a powerful statement, but I wondered whether it might have made a more fitting tribute to Colvin to take one of her strong stories and turn it into a movie. What made Colvin great, I think, was that she had more interest in the stories she so compulsively told than in her self. So much so that she died telling them.