When ambiguity becomes the suject

If you have a taste for uncertainty, South Korean director Lee Chang-dong's Burning may prove intriguing. 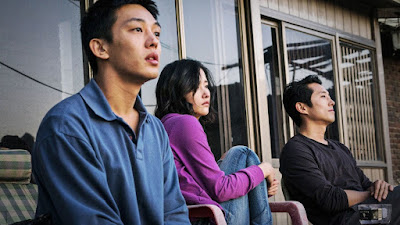 If you're the sort of person who likes movies in which every "i" is dotted and every "t," crossed, you'll probably want to avoid director Lee Chang-dong's Burning, a film that's loosely based on a short story by Japanese writer Haruki Murakami.

If on the other hand, you're game to join Lee as he travels through a world marked by uncertainty, ambiguity, and behavior that often defies explanation, you may find yourself intrigued by Burning, a movie that leaves us with the kind of space that invites speculation.

Lee brings his own social concerns to the material, setting his story against a background in which too many of South Korea's young college-educated men are unemployed or under-employed and in which class gaps have widened. Within that environment, Lee builds an artfully slow look at relationships that he never entirely defines. Then again, Lee's characters are not so much defined as sketched with small, telling strokes.

Lee Jong-su (Yoo Ah-lin) graduated from college and aspires to be a writer, but he's stuck tending to his decaying father's farm in rural Paju, a village so close to the border with North Korea that he often hears North Korean propaganda blasting on loudspeakers. Jong-su's father, who has anger management problems, has been arrested for attacking a local official.

Early on, Jong-su meets Hae-mi (Jeon Jong-seo), a young woman from the same village. Jong-su doesn't remember her, but Hae-mi tries to reassure him by saying that she's had plastic surgery and, as a result, has become "pretty." Should we believe her? Questions about the veracity of what characters say ripple throughout Lee's movie.

Hae-mi pushes the relationship. Initially, Jong-su goes along without showing much enthusiasm. But after the two wind up in bed, Jong-su falls deeply in love with Hae-mi. He agrees to feed her cat while she travels to Africa in search of satisfaction of what she calls "the great hunger;" i.e., spiritual fulfillment.

It's not difficult to see why Jong-su is captivated by Hae-mi. She's beautiful, engaging and charming, a young woman who claims that people easily can be tricked into believing illusions. Perhaps she's an illusion.

Over drinks, Hae-mi does a convincing job of peeling and eating an invisible tangerine. It's her way of making her point about deception to Jong-Su.

When Hae-mi returns from Africa, the story takes another turn. It seems that Hae-mi made a new friend in the Nairobi airport, an affluent young man named Ben (Steve Yeun). To Jong-su's dismay, Ben is probably more than a friend.

Later, Hae-mi and Ben visit Jong-su in the country. The trio smokes pot and the free-spirited Hae-Mi dances topless. Ben also tells Jong-su about a strange hobby he has. Every couple of months, he burns down an abandoned greenhouse.

Not long after this country gathering, Hae-mi disappears and Jong-su spends the rest of Lee's two-and-a-half-hour movie searching for her.

OK, that's enough about what passes for a plot in Burning. The movie isn't about what happens; it's about whether the characters ever really can grasp the nature of reality. Do other people, by definition, remain impenetrable mysteries?

Burning invites us to question everything that we're seeing, a process that's aided by its cast of fine young actors. As Jong-su, Yoo Ah-in can seem obtuse, even a bit dull, but the camera sticks close to him. He's trying -- without much success -- to figure out a game for which he doesn't know the rules. Because he doesn’t always push to find the answer to questions that bother him, you may wonder whether he’s willfully keeping himself in a state of confusion.

Jeon couples the allure of a femme fatale with an adventurous spirit. Yeun conveys the sense of entitlement that has come easily to a young man who never in his life has struggled.

Lee provides strong hints about what may have happened to the vanished Dae-Mi, but nothing transpires with absolute certainty in a movie in which all the characters are, in one way or another, adrift in a society in which meaningful connections have become as difficult to latch onto as the smoke that arises from the joint that Jong-su, Hae-mi, and Ben pass from one to another.