There are pleasures in the second Beasts movie, but it spends too much time running in place. 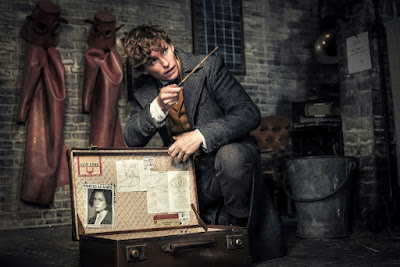 Back in the Pleistocene days of my youth, vendors at ballparks had a standard cry, "Get your scorecard here. Can't tell the players without a scorecard." We're talking about the days before mammoth scoreboards boasted screens the size of buildings. In my youth, the assumption was that if you arrived at the ballpark, you most likely came to watch the game.

I begin my review of Fantastic Beasts: The Crimes of the Grindelwald this way because I wish someone had handed me a character roster before I saw the movie. Not only did I have to remember characters from the first movie in the series, but I had to track new additions.

All this by way of saying that this edition of Fantastic Beasts is a bit of a muddle that advances the series' overarching story only by a couple of inches -- and takes 134 minutes to do it. Obviously, a planned five-part series can't deliver its biggest bang in episode two, but a little more end-of-picture satisfaction would have been welcome. At the end of Beasts, I felt as if the story had worked up lots of sweat but mostly had been running in place.

Director David Yates, working from a screenplay by J.K Rowling -- she of the sacred word -- is asked to juggle a variety of plot points that revolve in a dizzying orbit around Newt Scamander (Eddie Redmayne), the series' ostensible main character, a wizard devoted to studying magical zoology. Some of Scamander's creatures live in a magical suitcase that the diffident wizard carries with him at all times.

Grindelwald, you'll learn, is an evil wizard played by a Johnny Depp, whose normal complexion has been augmented with enough white make-up to create the impression that pallor and villainy have become synonymous. Grindelwald seems to be a fairy tale Hitler, a fascist who wants to save the world with wizard pure blood before muggles (humans) screw things up entirely. The movie is set in the 1920s.

The movie opens with Grindelwald escaping from prison and moving to Paris. Among other pursuits, Grindelwald is trying to find Credence Barebone (Ezra Miller), a baffled young man who's eager to find out who his parents were. Another returning figure from the first installment, Credence seems morbidly depressed.

Then there are our old friends Jacob Kowalski (Dan Fogler) and Queenie Goldstein (Alison Sudo). She reads minds. He doesn't mind. The couple provides much of the comedy you'll find in The Crimes of Grindelwald, aside from some of the better visual flourishes.

Redmayne, who seems to be wandering through the movie, eventually encounters a middle-aged Dumbledore (Jude Law) who asks him to confront Grindelwald, something Dumbledore himself can't do because he and Grindelmore once were more than brothers and friends -- or some such. Hmm.

Law, by the way, comes closest to calming the movie down to tolerable levels. His Dumbledore seems a welcome pillar of simplicity in a screenful of visual over-abundance.

Other participants in this pre-Potter farrago are Katherine Waterston as Tina, a former Auror; i.e., a wizard chosen to fight crime. Zoe Kravitz turns up as one of Newt's former classmate's at Hogwarts; the fabled school makes a rather brief but welcome appearance in what I'm choosing to call Beasts II, following on the heels of 2016's Fantastic Beasts and Where to Find Them.

Crimes of Grindelwald probably qualifies as one of those critic-proof movies that fans will support, even if they quibble with some of its choices and there are pleasures to be had from Philippe Rousselot's cinematography, from the scale of some of the movie's more elaborate settings and from some of its visual invention.

Somewhere in all this Rowling bric-a-brac, a serious confrontation between good and evil lurks. If I had a magic wand, I'd wave it and order all concerned to please get on with it.