The Coens sing a weird ballad 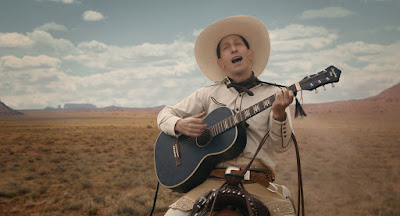 The Coen brothers (Joel and Ethan) tackle the West in The Ballad of Buster Scruggs, a six-part anthology of short films in which breathtaking visual acuity couples with a morbid sense of humor and western mythology gives way to chilly existential horror. The six films -- united because they're presented as part of a book in which they're bound -- suggest crossbreeding between lurid western pulp and tales told around a campfire.

Not all of the episodes are successful and, sorry to say, stretches of the movie are duller than you might expect from the Coens. But this is a Coen brothers film and, as such, demands some attention from those who've been following the Coens since the days of Blood Simple, some 24 years ago.

In the first episode, Tim Blake Nelson plays the title character, a singing cowboy with an aggressively cheerful manner. Nelson's Buster Scruggs is also a killer who guns people down between songs. One of the movie's best episodes, this one also serves as an announcement that the Coens are hell-bent on replacing the Wild, Wild West with the Weird, Weird West.

Other chapters in the Ceon's rueful book include a story about hanging starring James Franco and a bizarre riff on wagon-train movies that focuses on a woman (Zoe Kazan) traveling west to start a new life but meeting with a sorry fate.

Then there's Meal Ticket, the story of a traveling showman (Liam Neeson) who goes from town to town with a legless, armless man called Hamilton, the Wingless Thrush (Harry Melling). Neeson's character sets Hamilton on the stage where he recites Shelley, Shakespeare and Lincoln's Gettysburg Address to increasingly sparse audiences. Hamilton's career soon will be undermined by an unlikely new entertainer.

Tom Waits portrays a lone prospector who strikes gold but must fend off trouble.

The final chapter of this blood-stained book takes place on a stagecoach where Saul Rubinek (as a Frenchman), Tyne Daly (as a rigidly upright woman), Chelcie Ross (as the always-necessary bearded old trapper), and Brendan Gleeson (as a passenger who sings a sad song) take their weird ride toward ... well ... you'll have to see the movie to discover where they all wind up.

The Coens have fun with the movie's language, which is florid and overdone, the formal-sounding speech of characters aspiring to -- but not always attaining -- eloquence.

For all the Coens wit and wiliness, The Ballad of Buster Scruggs sometimes feels caught in the pages of the book that serves as its framing device, a dusty volume that may be a sorrowful lament for a world that has been mortally wounded and has nothing left to do but stagger toward the grave.

Creative as The Ballad of Buster Scruggs can be, I'm looking forward to seeing the Coens turn the page.

Would you recommend seeing this? Thanks.

Sure, if you're a Coen Brothers fan. If not, know that you'll see a movie in which some of the segments work and others ... well ... they don't.

Sorry for the late response. If the only movie of theirs you've seen is No Country for Old Men, do you think on the whole the anthology would still be worth it? Thanks.

Are you talking about yourself? Only one Coen brothers' movie? If so, do yourself a favor and catch up, beginning with their first movie, "Blood Simple."

Yes, I am talking about myself. I realized I've actually seen two of their movies. I also saw "The Ladykillers." Given my situation, do you think my lack of exposure to their work would preclude me from enjoying their latest or not? Thanks.

Nick, I think you may be making too big a deal out of all this. It’s not my job to tell you what you should or shouldn’t see. Of course, criticism indirectly fufillfils this function. A positive review can be taken as a recommendation, a negative review, as a suggestion to avoid a movie. But that’s up to the reader.
I understand that a mixed review — which is how I approached ‘The Ballad of Buster Scruggs’ — can be puzzling for readers who are looking to make decisions about how to spend their viewing time.
In sum, see the movie and make up your own mind about whether it was worth the time, effort and money.
When I suggested that you watch other Coen brothers movies, I should have been clearer: I wasn’t trying to give you an “educational” assignment, but trying to tell you that there’s much enjoyment be gained from movies such as “The Big Lebowski,” “Fargo,” “No Country for Old Men,” and “Barton Fink.”
Thanks fo reading and I hope you enjoy “The Ballad of Buster Scruggs” if you choose to see it.