An odd couple takes to the road

Viggo Mortensen and Merhershala Ali team up in the crowd-pleasing Green Book. 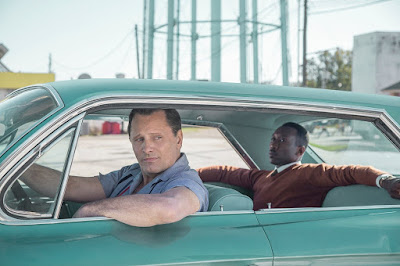 The temptation with movies such Green Book is to make too much of them. A movie about an unlikely friendship that develops between a cultured black man and an unenlightened white man too easily can be taken as a prescription for racial harmony. Better to view Green Book as an anecdotal tale which — no matter how amusing — doesn’t speak to complex racial issues that remain frustratingly unresolved in 2018.

Now that that’s off my chest, let me tell you about a crowd-pleasing odd-couple comedy directed by Peter Farrelly, who usually works with his brother Bobby on movies such as Shallow Hal, There's Something About Mary, and Dumb and Dumber To. Green Book stars Viggo Mortensen and Mahershala Ali in a story about a trip through the American South taken by Ali’s Dr. Don Shirley, an accomplished pianist, and Mortensen's Tony Vallelunga, a Bronx-based Italian-American with racial attitudes rooted in the 1950s.

The title derives from the book that black travelers used to learn locations of black-owned hotels, motels, and restaurants in the segregated world of Jim Crow or in other racially inhospitable parts of the country; i.e., most of the rest of the US. Oddly, the book gets short shrift as the movie unfolds.

As Vallelunga (a.k.a. Tony Lip) Mortensen gives his broadest performance yet, channeling his inner Joe Pesci to play a crude — albeit ultimately good-hearted — guy who loses his job as a bouncer at Manhattan's Copacabana nightclub and lands a gig driving for Shirley. The year: 1962.

The two men are polar opposites, which in movie language guarantees that they’ll eventually become friends.

Dr. Shirley is a decorous artist who, when he first meets Tony, appears in a flowing regal robe. Educated and cultured, Dr. Shirley initially is wary about Nick, but he knows that he needs a tough guy to guide him on his musical tour through a potentially hostile South.

Once Tony and Dr. Shirley hit the road, the movie becomes a two-hander in which an incredulous Nick reveals his stereotypical ideas about black people. What? A black man who's too fastidious to eat fried chicken or listen to R&B? Can Shirley be genuinely black if he doesn’t know the music of Aretha Franklin?

These bits typify the kind of odd-couple humor that Farrelly builds into the proceedings, playing them against Nick’s dawning realization that the Jim Crow South wasn’t a great place for a black man — much less a black man the movie shows as having gay inclinations.

Mortensen looks to have packed on the poundage for the role. A man of ravenous appetite, Nick eats -- while smoking, while driving, while anything. I half expected him to try to eat the '62 Cadillac in which this bickering pair travels. For Nick, a slice of pizza consists of an entire pie folded in half and jammed into his mouth.

Ali, who impressed as a drug-dealing father figure in Moonlight, creates a portrait of a lonely man whose talent and cultivation can’t insulate him from racism. At a recital at a country club, Shirley is fawned over as a performer but isn't permitted to eat in the dining room lest the club’s white members should be put off their feed.

The two main characters are meant to learn from each other: Tony tries to introduce Dr. Shirley to what he sees as the “real” world. Dr. Shirley gives Tony a few lessons in aesthetics and sensitivity, dictating the love letters Nick writes to his wife, nicely played by Linda Cardellini.

Based on a true story, Green Book was adapted from a book written by Vallelgona's son, Nick, and you're bound to hear the movie's many enthusiasts speak of it in glowing terms. Sure it’s encouraging to watch two men fight through their preconceptions about each other, and Farrelly's no slouch when it comes to comedy. But Green Book struck me as a movie more anxious to warm hearts than risk getting under anyone's skin.

A wise colleague once told me that she fielded such questions by asking for more information about the taste of the person posing the question. That's a smart approach because the movie that appeals to me may not appeal to you and very few movies are so wonderful that they simply must be seen or so awful that they should be entirely avoided.
I'm mixed on "Green Book," so you'll have to make up your own mind.
As for "Monrovia, Indiana, any documentary by Frederick Wiseman, is worth seeing -- even one that might not qualify as his best.
Of course, you may not agree, which is why it's best to keep in mind that a review expresses my reaction, which I hope is an informed one.