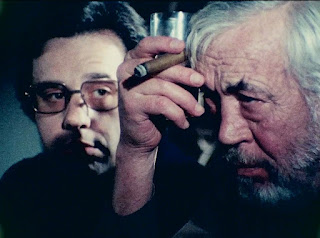 It has taken 48 years for Orson Welles' The Other Side of the Wind to reach the screen. Still unfinished when Welles died in 1985, the movie will show on Netflix beginning Nov. 2, also the date of its limited theatrical release.

The team that brought the film to fruition sifted through more than 100 hours of footage and consulted Welles' notes to make this cinematic mash-up. Why mash-up? Parts of the movie are in color, parts in black and white. To add to the sense of discombobulation, Welles filmed in 35 and 16 mm, as well as in Super 8.

I wish I could say that The Other Side of the Wind stands as a work of genius on a par with Welles' great work. Citizen Kane and Touch of Evil obviously come to mind, but this bit of Hollywood navel gazing has more in common with Welles’ docudrama, F is for Fake. Rather than a hidden masterpiece, The Other Side of the Wind opens a window into Welles’ mordantly disaffected consciousness. The movie seems to exist entirely in its own world.

The best I can say is that The Other Side of the Wind includes flashes of genius, images that rival the ambiguity, allure, and pretensions of Italian director Michelangelo Antonioni and splashes of humor that should appeal to those familiar with the films of the 1970s. A must-see for film buffs (whether they admire it or not), the movie may be of only marginal interest to the general public.

A brief synopsis: John Huston plays Hannaford, a director who's trying to finish a movie and who has been widely taken as a stand-in for Welles. Peter Bogdanovich, one of Welles' most ardent supporters, appears in the film as an up-and-coming director whose relationship with Hannaford becomes increasingly ambiguous. We see snippets of the film that's being made by Hannaford; it stars an often nude Oja Kodar, Welles' partner at the time.

Much of The Other Side of the Wind takes place at a party designed to raise money for Hannaford to finish his film, a task that won't be easy because his male star (Bob Random) has left the production.

The Other Side of the Wind can be confusing, insightful and, alas, a bit glib. Still, the opportunity to see a lost bit of film history doesn't come along every day. If you care about such things, you may exult in the parts of the film that reflect Welles' out-sized genius and suffer through the rest. I wouldn't be surprised if film enthusiasts disagree about which parts astonish and which leave one in a state of bemused indifference.