A hard-core look at the drug war 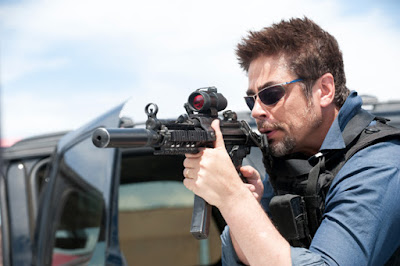 French Canadian director Denis Villeneuve's Sicario is a dense, complicated and deeply pessimistic movie about the drug war and, quite possibly, the collapse of just about all civilized values.

If you're looking for a diverting night at the movies, look elsewhere. In Villeneuve's supremely caustic drama, even triumph tends to feel bad.

So there's your warning.

If, on the other hand, you're ready for a dark thriller that pulls no punches, you may want to give Sicario a try. Watching Sicario -- the word means hit man -- I half wondered whether Villeneuve (Prisoners and Incendies) felt that Steven Soderbergh's Traffic was a little too light-hearted and needed a corrective.

The story introduces us to FBI agent Kate Mercer (Emily Blunt), an agent who's recruited by shadowy forces to participate in an anti-drug task force that's led by a swaggering Matt Graver (Josh Brolin).

We're not sure whether Brolin's Graver is a CIA agent or a DEA agent, but whoever writes his checks seems willing to let him play by his own rules. When we first see him, he's at a meeting wearing flip flops, an obvious clue that this is no ordinary cop.

In addition to the cops who work with Brolin, we meet Alejandro (Benicio Del Toro), a mysterious fellow whose role in the proceedings remains vague. It's a safe bet, though, that the taciturn Alejandro isn't handling human relations.

It takes a while for the plot to clarify, a smart decision on Villeneuve's part. He keeps us at Kate's meager level of understanding; she's thrown into a chaotic situation she doesn't comprehend. Neither do we.

Slowly we learn that the mission of this drug-fighting force involves undermining the stability of the Sonora cartel so that law enforcement officials can locate the guy who heads it.

Set in Chandler, Ariz., the movie's opening raid makes it clear that the cartel isn't playing around. Blunt's Mercer joins agents who find a house full of mutilated bodies hidden behind its walls, one of the more macabre sights you'll see in a movie this year.

Villeneuve's depiction of Juarez, site of a mid-picture raid, will do nothing to boost tourism in that town, except maybe for those who want to see what a city looks like when bodies are left hanging from overpasses.

Cinematographer Roger Deakins (No Country for Old Men) gives Villeneuve images to match his foray into a world without clear moral boundaries.

A late-picture swerve into revenge territory may be a bit too pat, but Villeneuve gives most of this down-and-dirty drama an undertow of dread that's augmented by Del Toro's unnerving performance. Brolin's smug savvy seems right for a character who wants people to think that only he truly understands what's happening.

Blunt may be a bit too soft for this kind of role, but if you don't entirely buy her performance, you may not entirely reject it either, and it does nothing to undermine the corrosive atmosphere Villeneuve creates.

A insistent score by Johann Johannsson comes as close as you'll want to get to an aural equivalent for what it feels like to experience pure dread. That score has its softer moments, but it also includes sounds that could pass for the agonized groans of hell.

Violent and harsh, Sicario is the kind of movie that leaves tread marks on the psyche.