Well-made Bridge of Spies takes us back to the '50s for a story of espionage and intrigue. 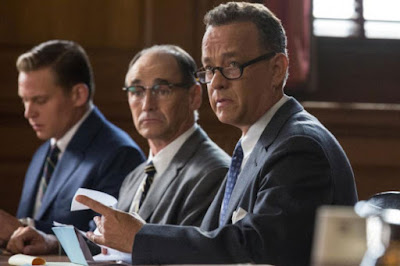 The opening sequences of Steven Spielberg's Bridge of Spies deal with the arrest of a Russian spy, an incident that allows Spielberg masterfully to establish time (the 1950s) and place (Brooklyn, N.Y.), as well as to infuse a situation we don't yet understand with gloomy tension.

Suspenseful, atmospheric and brilliantly underplayed, the film's early going reminds us just how good a director Spielberg can be.

Based on a true story, Bridge of Spies allows Spielberg to reunite with Tom Hanks for the fourth time.* The movie also provides Spielberg with a canvas on which he can sketch a complicated story about a period when U.S./Soviet tensions were at their peak.

Hanks plays James B. Donovan, a New York insurance lawyer who's drawn into international intrigue when he's asked to defend Rudolph Abel (Mark Rylance), the Soviet spy who's caught by the FBI in the movie's opening.

The legal fraternity feels homage must be paid to the notion of a fair trail, but just about everyone believes that Abel should be convicted without much fuss.

In full decency mode, the instantly likable Hanks paints a portrait of a man trying his best under difficult circumstances. Abel is convicted, but Donavan saves him from the death penalty with a pragmatic argument: Someday the U.S. may need a spy to trade for an American prisoner who has been accused by the Soviets of espionage.

Defending Abel proves costly for Donovan who becomes a bit of a pariah. A brick thrown is thrown through the window of his family's home, and many think he's betraying his country.

But Donovan isn't willing to temporize for the sake of appearances. He's a decent man.

Not only is Donovan a good guy, but -- as it turns out -- he's also prophetic.

Working from a screenplay by Matt Charman and Joel and Ethan Coen, Spielberg also introduces the story of Francis Gary Powers (Austin Stowell), the U-2 spy pilot whose plane was shot down over Russia in 1960. Donovan is asked to travel to Berlin to broker the trade he foresaw.

These chilly Berlin scenes heighten the spy drama as Donovan travels back and forth between West and East Berlin. To further complicate matters, an American student (Will Rogers) also is captured by the East Germans.

Donovan wants both Rogers' character and Powers to be swapped for Abel. The Russians are more interested in a one-for-one deal. So is the CIA, which regards the student as a negligible part of any negotiation.

No James Bond, Donovan struggles through his time in Berlin with a terrible cold that's made worse when several East German thugs mug him and steal his overcoat.

Hanks again gives the movie a reliable center, and a subtly entertaining Rylance makes his mark as a wry but resigned fellow who answers every question about why he's not more panicky with another question: "Would it help?"

Spielberg overworks the line, and can't resist a few Spielbergian touches that go against the movie's dark grain. I won't describe them here, but if you know Spielberg, you'll have no trouble picking them out.

In sum, Bridge of Spies stands as a mature and involving entertainment that recalls a time when our only concern seemed to be with the Soviet Union, and a sense of Cold War menace cast a chill over everything it touched.