A house in need of repairs 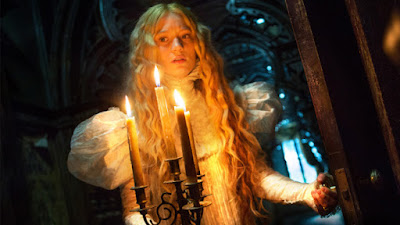 I was hoping that Guillermo del Toro's Crimson Peak would rival the alluring weirdness of the director's 2006 Pan's Labyrinth, but this lavish Gothic romance/ghost story wastes a ton of production design and a capable cast on a story that (at its most dramatic points) had members of a preview audience chuckling.

As best as I can tell, chuckles aren't what del Toro had in mind for a movie that's striving to be eerie and chilling.

To make matters worse, Crimson Peak brims with the kinds of behavior found only in second-rate horror movies.

Consider: A young bride (Mia Wasikowska) arrives with her dashing husband (Tom Hiddleston) at his family estate in England. A staggeringly gloomy home looks as if it was lifted from an over-priced theme park.

Leaves and later snow drift through a large hole in the roof, but Wasikowska's Edith doesn't bother to ask whether Hiddleston's Sir Thomas Sharp has any repair plans in mind.

Did I mention that Edith, who aspires to be a novelist, is warned never to go below the house's first floor? Well, of course, she is.

To add color and perhaps symbolism, the Sharp home is built atop blood-red clay that seeps through some of the walls of Sharp's Allerdale estate.

All of this takes place after Edith loses her father, who's ruthlessly murdered in the bathroom of his Buffalo, N.Y, club. The movie opens in the U.S. before moving to Sharp's isolated British wreck of a mansion.

Del Toro's depiction of Buffalo society in 1901 seems to have some potential. At minimum, it demonstrates what a movie looks like when some considerable part of the costumer's budget appears to have been spent on women's hats.

Edith's father (Jim Beaver) immediately mistrusts the aristocratic Sharp, who's trying to persuade him to invest in a machine that mines clay. A self-made industrialist, Beaver's Carter Cushing prides himself on being a good judge of character.

These early scenes -- sort of an extended prologue -- also introduce us to a doctor (Charlie Hunnam), an earnest fellow who cares about Edith, and who quite predictably will figure into the movie's over-the-top finale.

Del Toro lays on the funhouse effects (skeletal-looking creatures emerge from floors or soak in bathtubs), but the story evolves in ways that seldom surprise.

Perhaps del Toro was betting that audiences would delight in seeing these musty horror tropes exhumed and presented with unashamed blatancy, but -- in the clinches -- the resultant movie proves as silly as it is somber.

If Crimson Peak had been intended as a comedy, it might have worked, but del Toro seems to take the movie's swooning melodrama seriously.

Beyond all that, Crimson Peak's ghosts seem less like expressions of supernatural unrest than effects that seep into a movie like wandering strangers with no place else to go.

Posted by Robert Denerstein at 3:50 PM