The horrific life of a kiddie killer

Beasts of No Nation makes for harrowing viewing. 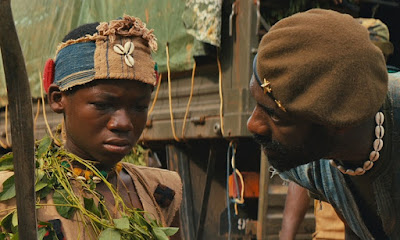 Watching director Cary Joji Fukunaga's Beasts of No Nation, I was reminded of the axiom that cautions us to be careful about what we wish for. Sure, many of us want (or say we want) movies that don't short-change real-life horrors.

But when such movies arrive, they aren't always pleasant to watch.

Starring Idris Elba and newcomer Abraham Attah and based on a novel by Uzodinma Iweala, Beasts of No Nation takes place during a civil war in a fictional West African nation. The story centers on the transformation of young Attah's character from a cheerfully mischievous boy into a brutal child warrior.

Attar's Agu is enjoying a happy childhood with his family when an invading government army throws his village into chaos. In the resultant panic, Agu's mother and baby sister are sent to the capital. Agu's father and older brother are brutally murdered.

Left alone, Agu flees marauding soldiers as he tries to make his way through the bush.

Tired and hungry, Agu eventually is captured by rebel forces led by a character known only as Commandant (a scary and convincing Elba). Wide-eyed and frightened, Agu learns the ways of the rebel forces and becomes a kiddie killer.

Boys, Commandant insists, aren't useless. Why? They can pull triggers.

Agu joins with boys who've gone through similar experiences and who now are subject to brutalization and molestation within the "family'' of warriors that Commandant has created.

Agu's experiences are nothing short of horrific, and the scene in which he makes his first kill hardly could be more harrowing. Ordered by Commandant to commit murder, Agu buries the blade of a machete in a cowering man's skull. He now belongs to the gang.

Commandant certainly is capable of monstrous behavior, but he's given a human dimension by Elba. It seems entirely plausible that a character as charismatic as Commandant could hold sway over his charges through a mixture of inspiration, fear and intimidation.

To the film's credit, we also learn that Commandant may be subject to betrayals by the political puppet masters who use his brutality but who may inevitably disown it -- and him.

The film benefits from an intermittent narration provided by Agu, who is well portrayed by Attah -- a 14-year-old non-professional from Ghana. Attah embodies Agu's increasing numbness to the violence that surrounds him and which he perpetuates.

Yet, Attah never loses touch with Agu's vulnerability. You can't look at him without realizing he's still a boy, and that makes Agu's violence all the more heartbreaking.

Fukunaga (Sin Nombre and episodes of the first season of HBO's True Detective) doesn't have to raise the emotional wattage for us to realize that we're watching a story of tragic proportions.

But as I said at the outset: We need movies such as this, but that doesn't mean they go down easily. They are (and should be) disturbing as hell.