Labyrinth of Lies shows us a post-war Germany that's steeped in denial. 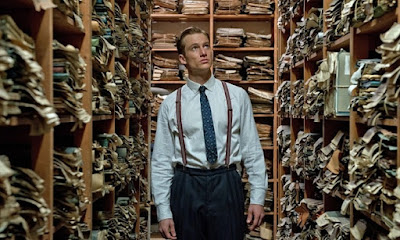 There may be few more explosive topics than how post-war Germany came to grips (or didn't) with the country's Nazi past, particularly as it involved the Holocaust.

The German movie Labyrinth of Lies qualifies as a mostly prosaic attempt to show how the country began to overcome a serious case of Holocaust denial.

In the decade following the war, many Germans adopted a rationalization based on what they deemed a "practical" necessity: Talking about past horrors would only demoralize a new generation that was trying to help its country rise from the rubble.

Besides, Germany's web of former Nazis was far more extensive than many suspected, and many of those in West Germany's leadership circles had no desire to discuss past party affiliations -- theirs or anyone else's.

Labyrinth of Lies centers on events leading to the Frankfurt Auschwitz trials, which began in 1963 and which focused on SS personnel who had served in Auschwitz.

A year after Adolf Eichmann was executed in Israel, Germany began its own series of trials, proceedings that contributed to the growing record of Nazi atrocities.

Labyrinth of Lies tells the story of a dedicated, young prosecutor (Alexander Fehling), a fictional character who fights to overcome official resistance to exposing former Nazis and bringing them to justice.

A journalist (Andre Szymanski) becomes an ally in the prosecutor's fight. As it turns out, Szymanski's character knows an Auschwitz survivor, an artist who serves as the voice of the movie's victims, who mostly are ignored in favor of examining German complicity and guilt.

Radmann works for Fritz Bauer (Gert Voss), an attorney general who supports the young man's efforts. Most of Radmann's colleagues oppose any inquiries into the immediate German past.

To add to the drama, Radmann is an unseasoned prosecutor who has spent nearly all his time on inconsequential traffic cases. Naturally, there's resentment when Bauer puts the young man in charge of an investigation with the potential to jar the country's already fragile psyche.

Radmann also falls in love with a seamstress (Friederike Becht) who aspires to be a fashion designer. Becht's Marlene begins to benefit economically when Radmann is courted by some of Frankfurt's bigwigs, many of whom are former Nazis. They hope to lure the young man from his task.

During the course of his investigations, Radmann even discovers that his own father was a member of the party.

Aside from a detour with a major law firm, Radmann persists in his newfound cause, eventually developing an obsessive commitment to capturing and trying Josef Mengele, the Nazi doctor whose sadistic "experiments" on human beings have been well-chronicled elsewhere.

There's informational value in Labyrinth of Lies to be sure, but the movie's hampered by a bit of formula thinking at its core: Lone man fights forces of suppression.

Besides, if the drama were going to focus on a solitary figure, it probably should have been State Attorney General Bauer, a determined but worldly character who seems far more interesting than his callow young charge.