Experimenter takes a creative look at the work of a psychologist. 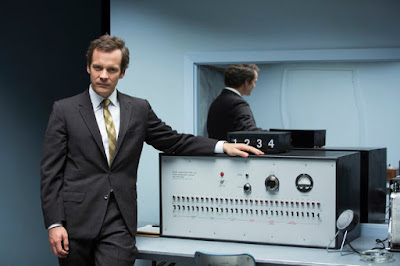 At least two experimenters are involved in Experimenter, a movie whose principal events unfold during the 1960s.

In the early 1960s, Milgram (Peter Sarsgaard) conducted a series of controversial experiments at Yale. Dubbed the "obedience experiments," Milgram's work was inspired by his interest in Nazi behavior during World War II.

Milgram designed an experiment that was supposed to determine whether ordinary people could -- through suggestion and rules -- behave sadistically. Would otherwise decent people administer punishment to others -- in the form of electric shocks -- simply because they were told it was part of an apparently legitimate experiment?

Known to American art-house audiences for directing Ethan Hawke in a modern-day adaptation of Hamlet (2000), Almereyda creates a purposefully abstract environment in which to study Milgram, his experiments and their ethical consequences.

Unafraid to take risks, Almereyda, uses black and white photos as backdrops, obviously artificial sets and other tricky conceits to tip us off to the fact that he's interested in both Milgram and in the human capacity to accept illusion, even when little attempt is made to conceal it.

At a couple of points -- perhaps to make clear that he's blurring the line between the real and imaginary -- Almereyda shows Milgram being followed by an elephant as we walks down a corridor, discussing his experiments.

We speculate about that obvious elephant in the room? Could it be an unacknowledged question: Is Milgram himself acting sadistically?

Milgram, a young Jewish researcher whose parents emigrated from Hungary in advance of the Nazi onslaught, governs himself with dispassion. He observes people under duress, and he's played by Sarsgaard with quiet commitment and a belief in his objective rigor.

Almereyda opens the movie by introducing us to Milgram's signature experiment, one in which no electric shocks actually were given, something the subjects administering the shocks didn't know.

The movie goes on to raise questions that it's never going definitively to answer; i.e., "Is Milgram violating academic ethics by putting subjects under too much stress? And does this artificially created situation really have any equivalency with what happened in Nazi death camps?

Almereyda gives Milgram ample opportunity -- in whispered comments from his diary or in remarks delivered directly to the camera -- to make his conclusions clear: Hideous behavior is situationally determined. Given the right circumstances, most people will submit to an authority that encourages them to behave badly or even sadistically.

Almereyda includes biographical details: We meet Milgram's wife Sasha (Winona Ryder) and follow the course of an academic career that saw Milgram move from Yale to Harvard, where he was denied tenure. He then was hired by City College of New York, where he was awarded a full professorship.

Intellectually challenging and tricky, Experimenter operates on low dramatic voltage. It's a subdued provocation that's designed to throw us off balance by raising fundamental questions about choice: Those made by Milgram, those made by his subjects, and, presumably, those made by us, as well.