Kate Blanchett and Robert Redford star in a drama about the story that took down anchorman Dan Rather. 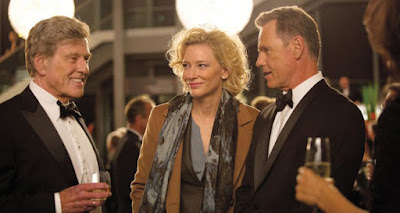 Truth, the story of how a team of crack 60 Minutes' reporters got misled while doing a 2004 story about George W. Bush's military record, tries to mount what might be the most high-minded defense of journalistic misjudgment ever.

The real-life story resulted in resignations and firings, including the abdication of Dan Rather from the anchor throne of the CBS Evening News. Rather also had to issue an on-air apology.

In Truth, absorption with the details of researching the story ultimately gives way to a lamentation over a once honorable news business that has been swallowed by self-serving corporate concerns.

Look, I'm as happy as the next former ink stained wretch to cry in my beer over the sorry state of contemporary journalism, but Truth may not have found the right story to make the case.

For those who've forgotten, the CBS story revolved around two central contentions.

One: During the Vietnam War years, influence was used to get the privileged Bush into the Texas Air National Guard, presumably as a way to avoid combat. Two: Bush didn't fulfill a substantial portion of his Guard commitment.

That's a good story to be sure, particularly in a year when Bush was running for his second term, but significant doubt was cast on the authenticity of two documents Mapes and company relied on to prove make their argument.

Truth, which stars Cate Blanchett as Mary Mapes and Robert Redford as Dan Rather, suggests that a few missteps along the way didn't necessarily undermine the story's essential veracity. That may be true, but it's not a position I'd want to argue in the court of journalistic ethics.

Redford, who starred in All the President's Men, a 1976 story about the journalistic triumphs of Watergate, again takes up the cudgels for a probing press. But even in a story of involving mistakes, Rather is made to embody a heightened form of journalistic virtue.

A pair of suspenders can't turn Redford into Rather. Still, he gives a decent enough performance as a guy who's been around the journalistic block.

Rather may be the big name in the story, but Truth focuses most of its attention on Mary Mapes, the gifted producer who led the team of reporters who researched the story before the heavy interviewing artillery -- i.e., Rather -- arrived.

Blanchett's certainly good at showing how the satisfactions of a job well done are undermined once Mapes learns that the story she thought was meticulously researched began to fall apart.

Obviously, the reporting team worked hard on the story, and Rather had ample reason to have confidence in Mapes, who won acclaim and, later, a Peabody, for her work on the infamous Abu Ghraib story. (The movie, in an obvious irony, points out that Mapes won her Peabody after she'd been fired by CBS.)

So what we ultimately get feels a bit addled, a movie that mourns the demise of hard-nosed journalism, but focuses on a case in which the reporters very well may have been suckered.

Vanderbilt concludes with outraged flourishes over they way a major corporation treated reporters with a fighting spirit and a willingness to keep asking tough questions.

Sure CBS was concerned about revenue, its image and possible government retaliation. Maybe the network put its interests above a pursuit of the truth, but that doesn't mean the story that set off this firestorm wasn't flawed.

It's hardly surprising that things ultimately got ugly at CBS. When a network has to fall on its sword, you can bet that blood will be shed, and -- in the case of the Bush story -- some of it belonged to journalists who sincerely thought they had uncovered something big.

Perhaps they did, but the country since has moved on from a story whose greatest impact was felt by those who reported it.