When houses stop being homes

99 Homes humanizes the devastations of the mortgage crisis. 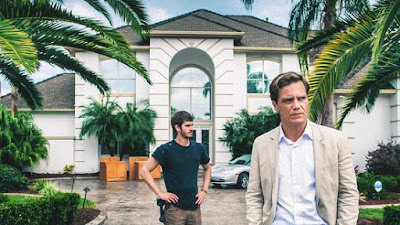 In 99 Homes, director Ramin Bahrani -- who made his mark in the film world with 2005's Man Push Cart -- takes an exacting look at what happens when homes are in foreclosure and the vultures descend, a situation that in 2007 came to be known as the subprime mortgage crisis.

The set-up: Michael Shannon plays an unscrupulous real estate hustler who has amassed a small fortune, and Andrew Garfield portrays an unemployed construction worker who's evicted from his home, but winds up working for Shannon's Rick Carver.

Set in Florida during the darkest days of the recession, the movie early on finds Carver showing up at Nash's door with a couple of sheriff's deputies. They give Nash all of two minutes to gather his belongings and move his mother (Laura Dern) and young son (Noah Lomax) out of the house.

Nash initially resists, but there's no forestalling the inevitable. The family winds up in a bad motel with few prospects for improving its lot. At this point, you can feel hope swirling down the drain.

For his part, Carver wastes no time on hope. He's too busy scheming: He works for banks, but knows how to scam the government for money. He'll also offer insultingly meager amounts of cash to take over a home for a quick flip. He calls the program "cash for keys." How about taking $3,500 for your home before the sheriff shows up?

Unlike Carver, Nash has a conscience, and Garfield does a fine job of mining Nash's uneasiness. He's in a position that's bringing in unexpected amounts of money, first as a handyman for Carver and then as a participant in evictions. He's required to push people around the way he once was pushed around, but he's never comfortable in the role.

Shannon makes Carver a credible character, a man whose ethos springs from a dog-eat-dog reading of reality. He saw his father get screwed by the system, and vowed that he'd never share such a fate. Carver isn't about to be the dog that's eaten.

Carver's a businessman who learned how to shut off his emotions so that he could capitalize on other people's suffering. An amoral pragmatist, he's willing to give Nash an opportunity to flip the script on a society that has left him out in the cold. There's no bailout for losers, Carver insists.

To Nash, the home from which he was evicted is the cornerstone of his family's stability. He grew up the house. His mother operated her haircutting businesses there, and his son knew no other residence.

Carver's view of homes couldn't be more different. To him a house is nothing but a box and an opportunity to make money. Boxes have no emotional meaning and neither do the deluded people who live in them.

Carver used to make money by selling people homes. Now he makes money by throwing them out of their houses. He understands the irony, but doesn't much care.

Garfield, the British actor who took a turn at Spider Man, does fine work as a guy who wants to earn a decent wage with his hands, but finds himself dabbling in a world where money has become the only measure that matters.

Bahrani isn't afraid of social relevance, which may be why the movie's at its best when it's showing us what life is like for people who find themselves looking at their belongings on the front lawn and not knowing where the hell to go next.

It's an important image to absorb, but when you review the story in your mind, you may realize that Bahrani is better at presenting telling incidents and episodes than he is at delivering a fully enriched narrative.

Still, 99 Homes puts us in touch with a devastating moment from which many have yet to recover -- and perhaps never will.