The message outpaces the movie 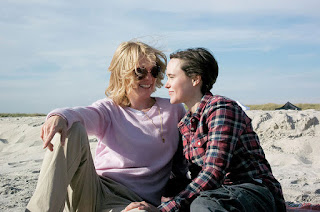 When a gay New Jersey detective learns that she has stage-four lung cancer, she embarks on a lonely fight to ensure that her pension benefits will be awarded to her domestic partner.

If that story sounds familiar, it's probably because Laurel Hester's struggles in Ocean County, N.J., were well-covered by the media.

In 2005, Hester battled with a board of freeholders who argued that as a lesbian, she wasn't entitled to the same rights as married heterosexual police officers.

Freehold, the resultant movie, makes convincing points about gay rights, but never finds an entirely convincing way of turning them into a compelling drama.

Julianne Moore (as Hester) and Ellen Page (as her partner, Stacie Andree) act out a script that easily could have been reduced to bullet points about equality.

In addition, some of the more interesting aspects of the screenplay (Hester's initial reluctance to be identified as gay for fear of reprisals by her fellow officers) are too quickly resolved.

In a piece of oddball casting, Steve Carell turns up as Steven Goldstein, a gay Jewish activist. Wearing a yarmulka, Carell bursts through the film's often bland surface with the force of a marching band invading a library.

Director Peter Sollett (Raising Victor Vargas) wrings emotion out of Hester's losing battle with cancer, and Moore certainly does her best to look as if she's on death's door.

Still, the biggest surprise in this undernourished drama centers on Michael Shannon, who plays Hester's partner, a cop who may not be fluent in the language of diversity, but whose conscience and decency lead him in the right direction.

It's not exactly a compliment to say that Shannon's Dane Wells might have made a more interesting subject than either of the movie's two principals. After all, Wells had nothing to gain in the fight other than to act out of his conviction that his partner had been a good cop who deserved his loyalty and support.