It's not the deepest of documentaries, but He Named Me Malala benefits from a young woman's dynamic personality. 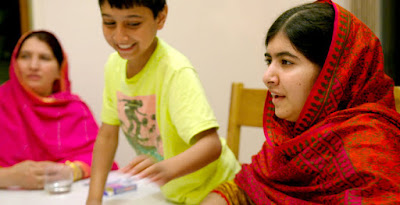 If you don't know by now, you should: Malala Yousafzai has become one of the world's most inspirational figures.

Shot in the head by the Taliban in 2012 for the "crime" of attending school in the Swat Valley of her home country, Pakistan, Malala -- as she's now familiarly known -- went on to win the Noble Peace Prize in 2014.

She shared the honor with Kailash Satyarthi, an Indian advocate for children's rights who hasn't gotten nearly as much attention.

That's not to say that Malala isn't deserving of notice and acclaim. She's bright, articulate and an energetic advocate for the education of young women around the globe.

A capable spokesperson for her cause, Malala has written a best-selling book (I Am Malala), traveled to Africa in support of education and appeared on many TV shows. (She recently appeared on The Late Show with Stephen Colbert, where she did a card trick.)

Now comes He Named Me Malala, a documentary by Davis Guggenheim (An Inconvenient Truth).

Considering the subject, it seems almost churlish to complain about He Named Me Malala, which tells Malala's story and advances her educational agenda.

From a film standpoint, He Named Me Malala can be summed up easily: Amazing subject about an amazing young woman with a dynamic personality. Otherwise, a medium-grade documentary that's bigger on inspiration than insight.

It's possible, though, that He Named Me Malala should become compulsory viewing for American middle and high school students, kids who often take education for granted.

Using animated interludes, Guggenheim tells Malala's story, and offers views of her life in the limelight.

He also gives us glimpses into Malala's life as a young woman at home with her family in England. Malala can't return to Pakistan without putting her life in danger.

From what we see of these British-based scenes, Malala's two brothers are terrific kids. Her father seems to play a central role in her life. Her mother isn't much heard.

Dad -- Ziauddin Yousafzai -- wonders whether he may be responsible for what happened to Malala. As a committed educator, did he force her into a role that endangered her life?

Malala answers the question with an emphatic "no." He (her father) named me Malala, but he didn't make me Malala, she says.

A promotional vehicle for worthy ideas, the film would have benefited from more substance and better organization, and it easily could have withstood a bit of fleshing out when it comes to informing us about the dimension of a global problem: the way some cultures classify women as beings unworthy of an education.

But no matter how it's packaged, Malala's story retains the inspirational quality that Guggenheim surely was attempting to give it. For many, that will be enough.