Despite a few chuckles, Rock the Kasbah pretty much seems pointless. 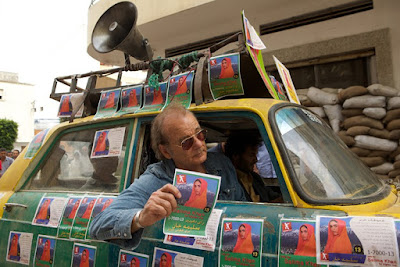 The new Bill Murray comedy, Rock the Kasbah, makes room for a worthwhile story of courage: A brave Pashtun woman risks her life to defy cultural norms so that she can sing on Afghanistan's version of American Idol.

In the case of the movie's Salima, the risk goes beyond being laughed off the stage. Salima's life is threatened by the men in her village, most of whom see her behavior as a cause for shame.

Salima's a fictional character, but the story has roots in reality. In 2008, singer Setara Hussainzada appeared on Afghan Star, the Afghan version of American Idol. Another woman, Lima Sahar, also competed on the show.

Hussainzada has been the subject of two HBO documentaries, 2010's Afghan Star and a 2011 follow-up, Silencing the Song: An Afghan Fallen Star.

Unfortunately, director Barry Levinson, working from a screenplay by Mitch Glazer, trivializes the story of his fictional singer by focusing on Richie Lanz (Murray) a bottom-feeding American who organizes tours for rock groups.

Remember? I told you this was a Bill Murray comedy.

When the movie opens Richie -- who lives in a dumpy apartment in Van Nuys neighborhood of Los Angeles -- is so down on his luck, he accepts a job taking a no-name singer (Zooey Deschanel) on a USO tour to Afghanistan.

Once in Kabul, Deschanel's character quickly realizes that she's in danger, and arranges to leave the country. She takes Richie's money, and his passport, stranding him in a two-star hotel in Kabul.

To make matters worse, a tattooed mercenary (Bruce Willis) claims Richie owes him $1,000 for helping to get Deschanel's character out of the country. He gives Richie 24 hours to pay up.

A couple of shady gun runners (Scott Caan and Danny McBride) offer Richie a way out. They'll pay him to deliver ammunition to a group of local villagers who are trying to defend their homes.

After an encounter with an IED, Richie and Willis' character reach the village, and Richie discovers Salima.

In the middle of all this and for no apparent reason, Kate Hudson appears as a hooker with (yes) a heart of gold, a woman who's trying to use the war to gather a nest egg that will launch her in the real estate business once she returns to the states.

Doing his best to convey Richie's perpetual cynicism and all-around crumminess, Murray ambles though Kabul (the film was shot in Morocco), a war-torn city where there are no rules, and where foreigners gather at a club where they drink and indulge in other pleasures.

Despite its ravaged location, the movie can't escape the bright glare of Hollywood cliche. A seedy, no-account guy must find a way to redeem himself. Richie discovers his route to salvation by standing up for Salima.

It's roughly the same pattern Murray established in last year's St. Vincent: the apparently irredeemable guy who's not as bad as he initially seems.

Although there are some chuckles (credit Murray), this dragged-out, shambles of a comedy doesn't amount to much of anything.

Maybe that wouldn't have mattered had Rock the Kasbah been funny enough to make us overlook its shortcomings or serious enough to excuse a very sporadic supply of laughs.