Billy Crystal and Bette Midler in a comedy that's silly, sentimental and not very funny. 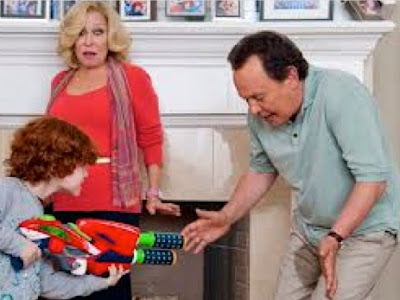 During Parental Guidance, a distressingly juvenile comedy starring Billy Crystal, a Little Leaguer uses his bat to slam Crystal's character in the -- why put it politely? -- testicles. It's intended as a funny moment, but like much of the comedy in Parental Guidance it's pretty painful -- and if not painful, predictably bland. The story finds old-school grandpa and grandma (Crystal and Bette Midler) taking care of their three grandkids so that their parents (Marisa Tomei and Tom Everett Scott) can take a trip. The parents worry because grandma and grandpa haven't seen the kids for a while and are not versed in contemporary methods of child rearing, the kind in which gratuitous indulgence has replaced sensible discipline. At times, it seems as if Crystal may be improvising, but neither he nor Midler can bring this mixture of obvious humor and rancid sentiment to a boil. Despite a host of problems, grandma and grandpa ultimately help the kids deal with their issues. The screenplay offers condescending jokes about the ways in which grandpa and grandma are technically illiterate. Other jokes involve constipation, urination and regurgitation. That's not to say that this PG family-oriented comedy is overly crude -- only to tell you that it's way short of wit, insight and, even worse, laughs.
Posted by Robert Denerstein at 3:00 PM