Hyde Park on Hudson is a smaller work than a great president deserves. 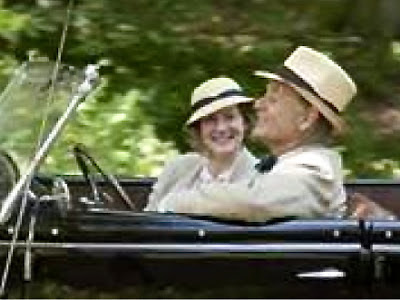 At 62, Bill Murray remains a mystery and a marvel, an actor who seems willing to try almost anything. I don't know about you, but if I were casting a movie in which President Franklin Delano Roosevelt figured in a major way, Murray's name probably wouldn't have made my shortlist.

As it turns out, Murray's FDR is the best reason to see director Roger Michell's Hyde Park on Hudson, a small-potatoes drama that revolves around a tepid sexual affair between FDR and his cousin Daisy (Laura Linney).

Judging by two recent movies, American history seems to be shrinking. Steven Spielberg's Lincoln deals with four months in the life of the 16th president and is as much about about legislative process as individual triumph. Hyde Park on Hudson, which doesn't even feature FDR's name in the title, focuses on another tiny sliver of history, showing more interest in FDR's libido than his leadership ability.

Even taken as a minor work, Hyde Park on Hudson remains problematic. It's difficult to understand what might have attracted the womanizing FDR to Daisy, a plain flower of woman who narrates the movie, but who comes across as severely challenged in the personality department. She's the poor cousin FDR draws into his powerful sphere, but she pretty much remains an outsider, never quite finding a niche in Roosevelt's inner circle.

According to the movie, FDR begins this lackluster affair on the eve of an expected visit to his mother's Hyde Park estate by King George VI (Samuel West) and his queen (Olivia Colman). FDR's mother (Elizabeth Wilson), who owned Hyde Park, anxiously tries to whip the household into shape for the royal visit. FDR's wife Eleanor (Olivia Williams) offers assistance, wit and tolerance when it comes to her husband's wandering eye. By this time, Roosevelt's marriage is mostly about appearances.

There are a couple of good scenes involving Daisy. The best of them has FDR's trusted secretary "Missy" LeHand (Elizabeth Marvel) schooling Daisy in the need to accept the fact that she isn't and never will be FDR's one-and-only.

Slim as it is, the movie picks up steam when the King and Queen arrive. Audiences already will be familiar with West's "Bertie," the main character in the much-acclaimed The King's Speech. Scenes in which the king and queen puzzle over American ways are mildly amusing (they fret about the prospect of having to eat hotdogs at an FDR-arranged picnic), and a late-night talk between FDR and the king allows Murray to show just how skilled a politician FDR was.

Of course, FDR was president long before the 24-hour news cycle. The press ignored his peccadilloes, never reported that polio had forced him into a wheelchair and generally cooperated in creating the illusion of authority Roosevelt needed to become one of the U.S.'s greatest presidents.

Michell captures the languid warmth of a New York State summer, as well as the feel for a mansion that the British regarded as "quaint," but which was sumptuous by American standards. As befits the title, the house becomes a kind of character in the movie, the frame on a very small picture.

To say that the story told in Hyde Park on Hudson is a footnote to history is perhaps giving it more credit than it deserves. The political stakes involve the king's attempt to ascertain whether Britain could count on the U.S. as an ally as it marched inevitably toward war with Germany.

Mild and mostly forgettable, Hyde Park on Hudson again underscores the fact that in his generation of SNL alums, no one has evolved into a more accomplished, versatile and adventurous actor than Murray. He makes clear the contrast between FDR's private life and public image and enables us to see just how much FDR understood the importance of maintaining that gap. Too bad, he's not in more of the movie.