An uphill fight to fly downhill

Was it crazy or bold or both? A documentary looks at a skateboarder's big adventure. 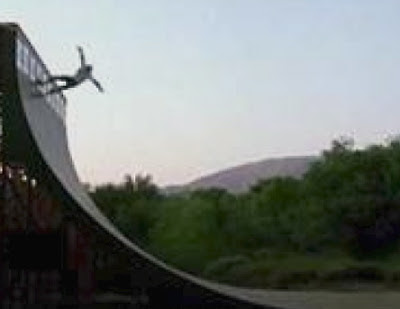 Before watching the documentary Waiting for Lightning I'd never heard of Danny Way, which is not surprising because my lack of knowledge about professional skateboarding is probably exceeded only by my ignorance about the feeding habits of certain rare species of mollusks.

Put another way, I neither know nor care about skateboarding, but that doesn't mean that I didn't find the slickly mounted and intermittently thrilling Waiting for Lightning without merit. Whatever the ultimate value of Way's achievements, there's little question that his success required overcoming obstacles that easily could have derailed a man of lesser drive.

Consider: Way's challenging childhood included the early loss of his father, the wayward drifting of his mother, the death of a beloved mentor and -- at one point -- a broken neck. I'm sure I'm omitting a few other catastrophes from Way's Dickensian resume, but you get the idea. He didn't have it easy.

Now 38, Way survived because skateboarding gave his life a singular focus. He was good enough at it to turn pro at 13 and to pursue a career that appears to have been devoted to testing limits.

In the interviews shown in Waiting for Lightning, Way makes a quiet and undemonstrative daredevil. It's left to other interviewees to explain and laud him as the film works its way toward an attempted feat that's as dangerous as it is outrageous.

In 2005, Way committed to jumping over the Great Wall of China on a skateboard.

Director Jacob Rosenberg gives us plenty of background on Way's life as he builds toward the spectacular China jump, which required the construction of a ramp and a quarter pipe that -- at least from a distance -- easily could have been mistaken for some sort of architectural aberration.

We also get to watch way ply his skills at a variety of stages of a career that the film sees as inspirational.

I don't know if I was inspired, but I have to say that the footage of the Great Wall jump was riveting enough to make me forget that -- to some -- extreme sport is synonymous with extreme folly.

All I can say is that I hope that kids who are taken with skateboarding enjoy the ride, but aren't tempted to follow in Way's adventurous footsteps. If ever there was a film that needed a "don't-try-this-at-home" warning, it's Waiting for Lightning. Clearly, Way occupies a world of his own.